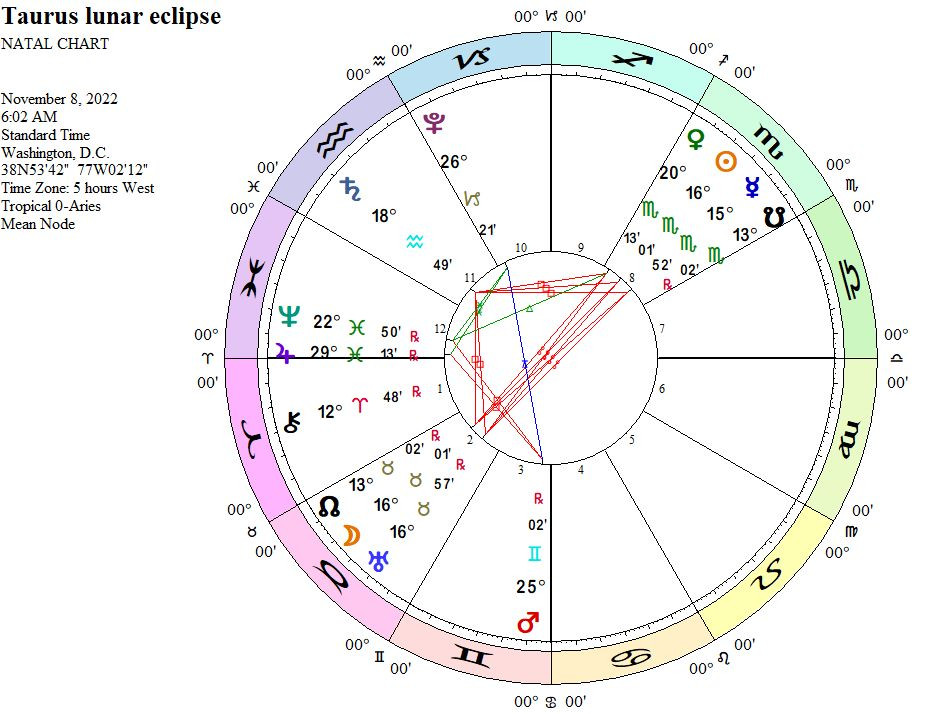 Resistance is futile. The only constant is change. Anything can happen. Enough is enough. Not just clichés, but facts of life right now.

The Taurus Full Moon lunar eclipse is bringing chapters to an end with a bang and a twist or three. It’s a full moon on steroids, amplifying emotions and speeding long-running dramas to unexpected plot points and conclusions. It’s raucous and noisy and revealing, shocking and startling, and ultimately forcing stability. But oh, what a wild ride before the train pulls into the station.

A Taurus full moon always spotlights creature comforts, appetites and other tangible aspects of human experience. Physicality is paramount; it wants what it wants within reach, where it can see, touch and taste it.

A lunar eclipse has an end-of-the-line vibe, closing chapters, shutting doors, ejecting people and situations for good. But first – it shines piercing light into hidden places and brings revelations that precipitate, or grease, or require some of those endings and departures.

Some of the revelations and blasts of light come with jolts and lightning. Some are reaching back almost two years. And the aftermath may not be entirely cleared up until next May or so.

An eclipse is destabilizing in its own right, but this one has assistance. The Moon is tightly conjunct Uranus, agent of radical, unpredictable change. The cosmic disruptor is about as unwelcome a companion as the Taurus Moon could want, with her preference for comfort and stability. Still, the company has its benefits. For one, if something doesn’t feel good or nourishing, Uranus is zapping its hold. For another, the disruption isn’t new. Uranus is helping the eclipse hurry long-running and relentlessly stressful dramas to a point of release.

Shoving matches have been going on in all of our lives since the beginning of 2021: Old vs. new. Conformity vs. individuality. Structure vs. disruption. These dichotomies have been flying off the ongoing square between Saturn, representing order, the status quo and adulting, and quick change artist Uranus. Relationships have been a near universal playing field for this square; how have your alliances reconfigured in the past year-plus? Considerably, no doubt.

Although their square finally began separating in the middle of October, they are still close enough to lock into the Full Moon and create a t-square: The Moon and Uranus opposing the Sun, Mercury and Venus, with Saturn between them as the way out. Neither emotion nor reason is on top in this configuration. Instead, each is pressuring Saturn with their separate agendas to bring structure and order (and maybe, just maybe, some accountability) to situations.

Think of a storm hitting a tree that has been shaken and shaken for years, and dead leaves and branches falling as rain and lightning pummel them. What falls now has been on its way out. Look at the eclipse as hastening that inevitability. That may be exactly what you’re wanting (at least the “make it stop hurting” part), and you may be giving the metaphoric tree a shake or a kick or something more forceful yourself.

With Mercury in Scorpio opposite the Moon, the most important thoughts and communications have more to do with undercurrents and vibes than with spoken or written words. This line-up carries an instinctual, cellular level knowing that will drive many a saga. Intuition has another doorway, too, via a sextile between the Moon and Neptune, which softens some of the jolts and offers a sense of divine providence. That may be an illusion, of course, but it’s a soothing one. Collaboration between Venus and Neptune helps as well. Their trine suggests that if nothing else, this eclipse will leave a lot of art in its wake.

It’s not quiet, though; quite the contrary. Minds and mouths are racing and the noise level is high. The content, though, may not be all that helpful (except, perhaps, to increase desires to “make it quit”). The hubbub comes from retrograde Mars in Gemini squaring retrograde Jupiter in Pisces. Appropriate for the duality and mutability of these signs, the planetary shoving match has paradoxical implications.

One streak is amplifying confusion, deception, misdirection and more, heightening ploys for sympathy, some of which are disingenuous, some of which are lies and projection. Another streak is pushing for compassion and kindness, with reminders of how connected we all are. Either type is mushrooming, bigger, louder, longer, in many cases exposing us to communications and conversations that really have nothing to do with us, as if someone cc’d their entire contact list.

Since both planets are retrograde, a lot of the noise is reawakening and revealing the past. The clamor provides a backdrop for all the dramas and revelations, endings and departures, wild cards and switcheroos.

There’s more to the story, of course. There always is. This eclipse moves us past the midway point in the Taurus/Scorpio cycle, which began in November 2021 and wraps up one year from now. The Taurus lunar eclipse serves as one bookend in the ongoing process. The other is coming in May, when a Scorpio lunar eclipse occurs at the same degree.

The elephant in the room? This eclipse is, yes, taking place on the day of the U.S. midterm elections. It would fit the eclipse energy and unpredictability for some major races not be to resolved immediately. Expect tumult; expect arguments; expect, ultimately, the air to clear and stabilize. Eventually. For much more detail, listen to my look at the astrology of the midterms with asteroid astrologer Alex Miller on the November 7 episode of my OM Times Radio show Celestial Compass.