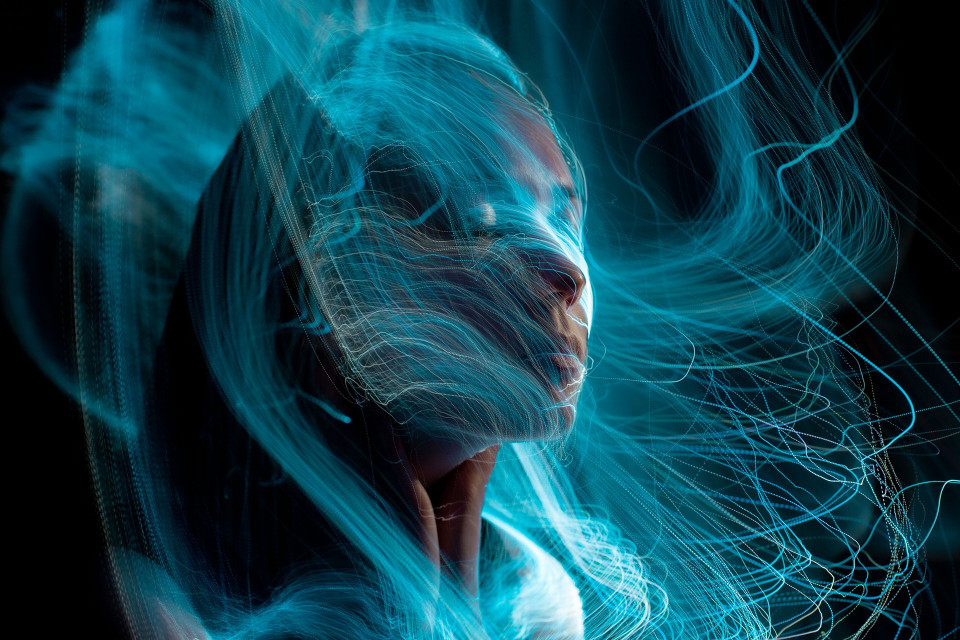 Just in time for Halloween: an astro-journey into the shadows, into the underworld, into our psyches, replete with all the treasures and monsters that lie within.

We’ve all got a ticket to ride with this month’s New Moon, a partial solar eclipse in Scorpio, the deepest, scariest, most powerful and honest sign in the zodiac. Climb aboard and embrace the experience. This spookhouse ride promises to be exhilarating.

It is hitting the reset button on power (personal, organizational, higher), clandestine behavior, cellular impulses, and all manner of matters usually hidden from scrutiny or consciousness. The process is dredging up high stakes issues related to resources and worth: what, how and where we invest and what we get in return; trust, intimacy, and betrayal; and that fun pair of inevitability, death and taxes.

No matter where the eclipse falls in your chart, money is a hot topic. So are self-worth and the messier, feral aspects of relationships, which are being woven into the proceedings by the New Moon’s tight conjunction to Venus in fearless, quietly powerful and perceptive Scorpio mode. She knows what’s what, what it costs, and what it’s worth (“it” being most anything), and she’s not inclined to give anything away – both in terms of tipping her hand and of handing anything over. She’s got a bit of a Gollum “my precious” streak, but unlike that denizen of the deep, she will let go of a treasure – for sufficient consideration.

The solar eclipse/Venus combo has a potent and clearing imperative. Something must leave and make room for the new beginnings and next phases that are being supercharged now. Fears and terrors and irrational impulses may be on the prowl. Their surfacing makes it all the easier to spot them and their infernal workings, to negotiate a new power dynamic with them (i.e, defusing them), and possibly to banish them.

Watch for gut level assessment and knowing of every key investment and resource in your life. If something doesn’t adequately value you, if your ROI is wildly deficient, it will leave without need of conscious decision on your part Relationships are collapsing; misaligned jobs are disappearing; people and situations are leaving. You may feel at times as if a cosmic ejector button is going off (and off… and off…) It may feel like a computer shutting down and going dark to install a new or updated operating system. The key takeaway of both metaphors: unlike a new moon, this solar eclipse is purging, clearing, and making room, on many levels, for the next installment.

Expect endings. Departures. Defcon 3 level freakouts. Scandal upon scandal, surpassing even what we’ve been witnessing (but in many instances confirming what we’ve suspected). And fierce, brave, unyielding staking of claims and territory. Every so often the skies deliver us to a “this far and no further” point. This is is drawing lines with indelible ink, cutting ties and delineating boundaries with a machete (or Elven sword) and laying claim to treasure chests, as likely to be filled by the soul and psyche as by worldly goods.

Learn more in my talk Living in the Material World: The Taurus/Scorpio Eclipses of 2021-2023

There’s little playing nice, or hinting, and probably little notice. Forces are at work that compel boldness and protectiveness. The feminine is steering the helm, and she’s not inclined to be sweet and conciliatory. (Her vibe is more like “I brought you into this world and I can take you out of it.”) Scorpio’s modern ruler Pluto is square Eris, warrior goddess of discord, stirring grievances that have been yammering for attention all year, at least. Pluto is also making an out-of-sign square to the Moon, forcing secrets, truths, and power games into the open and facilitating the flushing out qualities of the eclipse.

The sign’s traditional ruler Mars is trine Mercury in Libra, whipping up thoughts, bits of information, conversations, arguments, and debates, some of which will come back around again shortly, after Mars turns retrograde October 30. The aspects insures the actual speaking of words under this eclipse, in addition to the stealth / ESP mode at which Scorpio excels.

Dramas and developments could have a supersized quality, from Jupiter’s inconjunct to the Moon, adding oomph and entitlement to the event’s fierceness. The lunation is a push-off for Jupiter’s return to Pisces, which he retrogrades into October 28 for a nearly two month last pass. Steely eyes and nerves may abound at the actual eclipse, but don’t be surprised if emotionality follows after he leaves Aries (perhaps approaching the wistfulness of “Auld Lang Syne” on New Year’s Eve).

Decisions, changes, departures, upgrades, and new starts are for our ultimate good. They’re just another push forward in the perpetual healing process, with the North Node semi-sextile Chiron. Summon your inner witch and let her / him / them come out and play. It’s the season, and this is their time to work and brew and fly far far ahead.