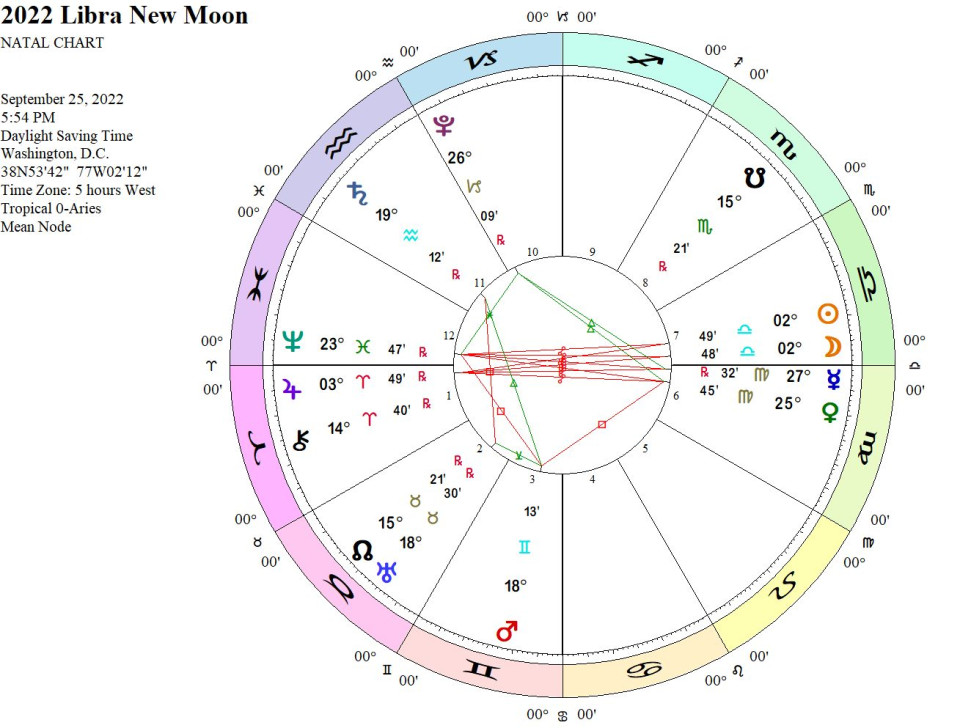 The Libra New Moon ushers in a fresh approach to relating, alliances, and agreements. It might not be as refined and nicely phrased as Libra prefers, though. And will probably interject a lot more of the individual into the conversation.

This Moon supports rebalancing relationships and situations of all sorts, and creating new ones with more exciting parameters than your usual. If you’ve been looking for an opening to put an arrangement on a different track, now is your time.

This New Moon is the first of the season. It happens just three days after the equinox and builds on the promise of that chart. Both have an exuberant, expansive feel, which dominates the New Moon. Relationship issues and possibilities aren’t hearts and flowers and greeting cards by any means, but have an exaggerated, somewhat strained quality, from bigger-is-better Jupiter’s opposition to the Moon.

Jupiter’s injecting the impetuous, self-starting, go-it-alone ways of Aries, making us all hyperaware of our end of every equation we navigate and negotiate. Jupiter’s retrograde status may lead to overcompensation, as the ruler of indulgence stirs memories of times we compromised or let our own impulses slide. He’s also contributing warmth, vibrancy, and grandiosity to all our New Moon ideas and endeavors. His Aries mode is taking some of the polish off Libra’s bent for grace and courtesy – an upside being that you might just go with the enthusiasm of a concept and the moment, instead of worrying about the presentability of an idea’s form.

The process is decidedly communal and filled with chatter. Libra’s ruler Venus is in Virgo, conjunct retrograde Mercury – echoing the messenger’s conjunction with the Sun at the equinox and taking that meeting into God-is-in-the-details territory. There will be talk, and how, critiquing, suggesting improvements, and likely with little or no emotion. Watch people and situations from the past resurface for another look, for closer inspection, for analysis and cleaning up. The resurfacing may be only in your mind, but some of it will be tangibly in front of you. How can you weave this into your New Moon endeavors? Think, chew on it, talk it over, be open to advice, and focus on healthy ways to go about things.

Ideas may veer from your ordinary. Inspiration and compassion are on tap – or at least at issue – with Venus and Mercury opposite Neptune. Venus and Neptune are the worldly and higher rulers of creativity/inspiration and love. Part of the compromise challenge their opposition poses involves boundaries. Virgo is in the “fences make good neighbors” camp, while Pisces erases boundaries with interconnectedness. The easy out is staying at the rational end and using the opposition to give distance and perspective on Neptune’s foggy, foggy ways. If you’ve romanticized or made excuses for someone, you may see more clearly now, especially as retrograde Mercury turns up overlooked or misread details.

Focus is at your disposal. Just as Jupiter is encouraging taking on more, more, more, another influence is facilitating sifting through possibilities and choosing just a few New Moon intentions or projects. Venus’ trine to Pluto is cutting away distractions and incidentals, some of which may involve ghosts or old situations Mercury retrograde is summoning. Interestingly, Pluto is, like Neptune, also a counterpart to Venus, here ruling desire and money (from garden variety to huge). Since Venus/Pluto contacts often involve triangulation, this New Moon may have some partners addressing that sometimes messy issue and trying out arrangements that make room for other people. (or cut them out of the picture).

It may help to approach this New Moon as a stepping stone in building the next phase of life. We are coming, slowly, out of a time of deconstruction, radical change, and challenges that have caused us to reevaluate priorities, as well as come to see that the way of life we had is slipping into the past. Inner and outer changes have stressed many a relationship and led to friends falling away, even ones we’d assumed would be with us forever. This New Moon brings reminders aplenty of what once was. Its importance, though, is in seeding what’s coming.

As you formulate intentions for this New Moon, consider these questions: How can I make [X] bigger? Better? How can I write my own needs and autonomy into my relationship ground rules? Is there anything to clean up or reorganize? What’s most important to me in the long run, and what is better to let slide?