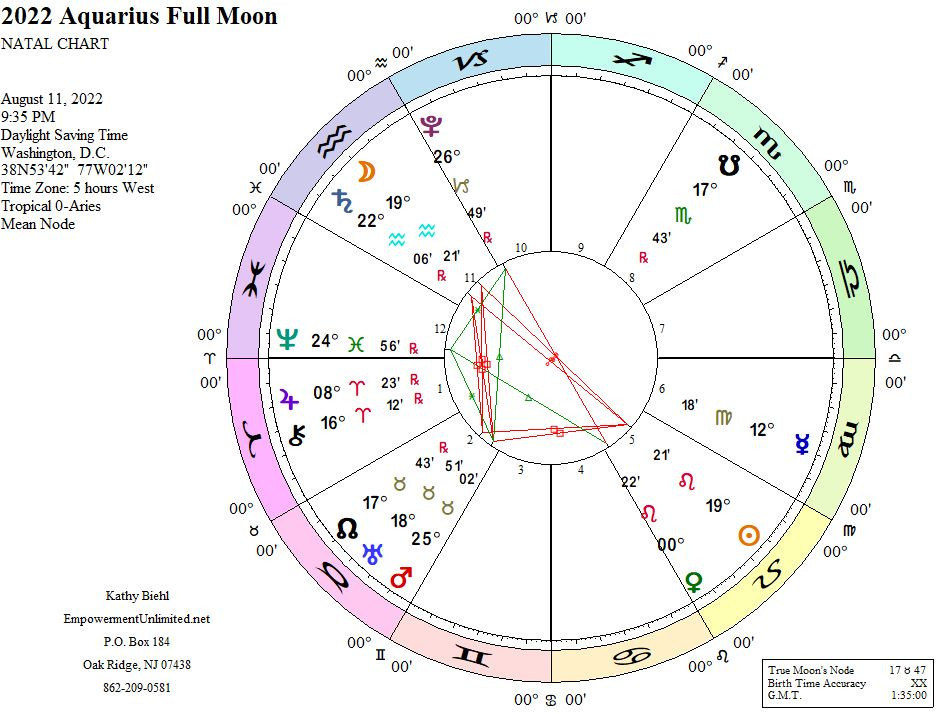 The Aquarius Full Moon drives home the personal, emotional impact of recent changes. It delivers a paradoxical mix of stabilizing and disruption, with echoes of last year and hints of October’s surprises.

A full moon in this sign runs heightened emotions through an intellectual lens, which offers distance, detachment, and coolness. It can demonstrate the power of words to pierce the heart; it can also enable objectivity or simply retreating into the mind. Because the Sun is in self-oriented Leo, this lunation has an inherent dichotomy between expressing yourself and maintaining your uniqueness while co-existing with others. The state of that balance is a common Aquarius Full Moon theme, which lights up how satisfied a person is with their place in the group (which could be an organization, a circle of friends, the community, or the greater scheme of things).

Every full moon encourages letting go and releasing. This one does more than facilitating a natural, flowing process. This full moon demands action, and it demands changes. Some of that may be sudden; some may be seemingly out of the blue; some may, honestly, be a relief. Some you may instigate; some may happen to or around you. And some may involve finding stability in light of disruptions in other people’s lives that have been spilling over into yours.

The reason is the pressure the cosmic quick-change agent Uranus is receiving from the Sun and the Moon. As the modern ruler of Aquarius, Uranus is in charge of this Full Moon and is also at the center of the action. This influence has been shaking life up radically, unleashing jolts, surprises, and “aha!” moments like crazy since its conjunction with Mars and the North Node August 1. Mars has moved on, the North Node is still close by, but Uranus is still at the degree of that triple conjunction and will remain there into October. (He stations retrograde on it August 24, so this stillness will intensify and intensify lightning strikes flying off Uranus.)

Now the shaking up gets personal. Now it hits close to home. Situations in our lives feel the strain. At a minimum, we experience emotional ramifications of much that’s been happening. The Sun and the Moon, logic and the heart, are coming at Uranus from opposite directions. They are forming a t-square, pressuring the influence of awakening, liberation, and radical change, demanding disruption in concrete, practical, physical resources.

And yet, the set-up is not so simple, because the equation also has an element of putting on the brakes and maintaining order (or at least the status quo). That comes from Saturn, the planet of structure, responsibility, and adulting. Saturn is the traditional ruler of Aquarius and conjunct the Moon – meaning that the Moon has to answer to both the Molotov cocktail thrower and the finger-wagger of the sky.

The result could be feeling squelched and bolting, or committing in one area and breaking away in another, or applying a wildly different approach to keep a situation in place. Whatever’s coming up has likely been teetering for a bit, and the pressure of this Full Moon pops it into “something’s gotta give” territory.

Look for what developments, dramas, and decisions have to do with destabilizing and rearranging that happened last year. Saturn and Uranus traveled in the same challenging aspect throughout 2021, with their square exact in February, June, and December. Their travels stress tested structures and pointed out flaws and fractures. (The poster child for this was and continues to be the electrical grid in Texas, which went out at the first square and is still under stress.)

Social groups underwent significant reshuffling then; think of who you talk to now (and how you feel about them) compared to the beginning of 2021. You may experience another round of the Sorting Hat at work now, moving alliances around and ushering out people who don’t share your values or adequately acknowledge or appreciate you.

While some of the shakeups will be external, many are within you. This Moon’s theme song is “I Want To Break Free” by Queen. Sing along with Freddie Mercury and see what you’re inspired to do. Some of the changes roll out this week. Others come at the beginning of October, when Saturn and Uranus square by degree, but not exactly. Still more comes to light when Uranus returns to his current degree in April 2023. It’s a process.