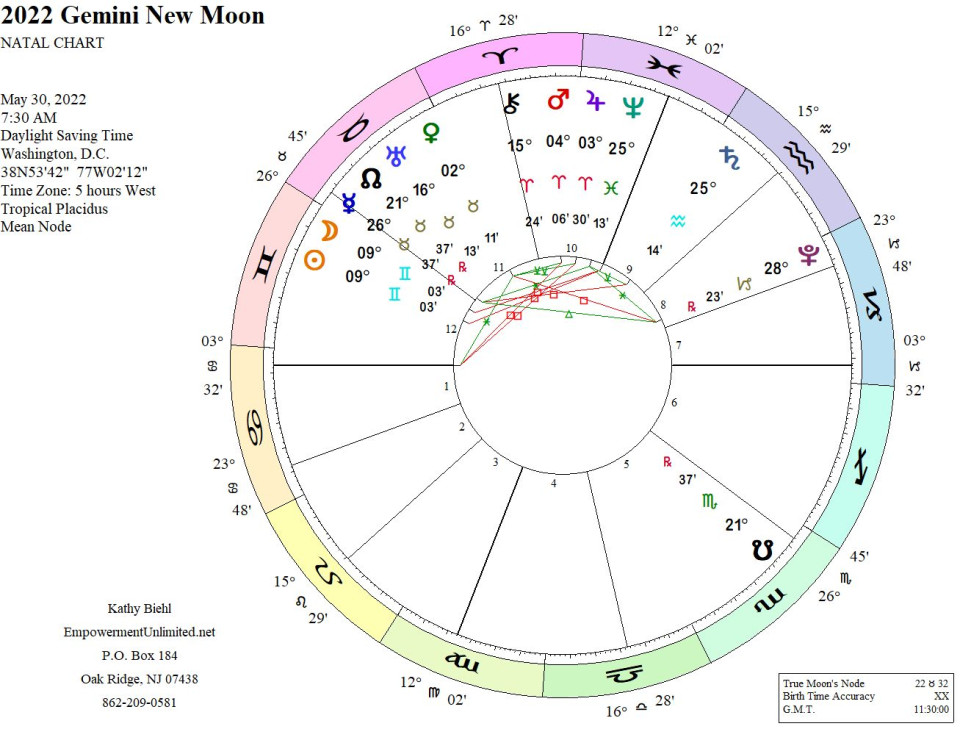 Eclipse season is over, but that doesn’t mean intensity is as well. The Gemini New Moon is wired for big bold action, underpinned by big deep revelations.

That doesn’t sound like the Gemini way. The sign is easy-breezy and multi-directional, prone to keeping options open and conversations light. Versatility and flexibility are still at our disposal as this New Moon blooms. They’re just backed by fiercer, stronger forces than the norm.

As the Moon’s mental energy darts about, it takes us backward, inward, and into corners. The process roots ideas and seeds in research, truth, and power. There’s little flying by the seat of our pants. Instead, we’re going deep and swinging hard.

There’s a decided sense we’ve been over some of this before. We’re taking a second look at information, situations, business, and issues. Misunderstandings are coming to light; hidden information and factors are, too. All are data that fuel the New Moon and everything it launches.

Mercury, the planet of gab, gadgets, and getting around, is in charge of the New Moon. His current travels are behind the “here we go again” vibe. He’s retrograde, a condition that heightens miscommunication, while also bringing opportunity after opportunity for review, revisiting, reworking, and redoing.

Much of that involves financial and practical matters, with Mercury back in the earth-bound, here-and-now focused sign of Taurus. Gemini moves quickly, but Taurus does not, preferring to sink into (and stay in) experience in a concrete, sensory way. Paradoxical, yes, but if any sign can sail through a paradox, it’s Gemini. Taking time and, more importantly, taking good long looks are possible now. If you missed the cost or value of something earlier, you may pick up intel about it.

Mercury’s also delivering revelatory qualities to this New Moon. He’s making the second of three trines to Pluto, keeper of secrets, huge treasure, power, and subconscious drivers. The link connects the depths to the surface, the secrets and power games to their financial impact.

They first trined April 28, just before the Taurus New Moon Solar Eclipse, and will again June 10, a week-plus after the New Moon. This middle point, with Mercury retrograde, promises to drill into deeper and deeper hidden places – and hiding places – and pull out dirty secrets galore. And valuable data as well.

Think of the trine like a metal detector. Use it. Poke around and see what you turn up. Look for answers and truths. Speak up, too. Focusing on your values, and your financial impact, makes uncommon candor possible, as well as conversations that have felt hard previously.

It’s possible that the trine will also make you selective about your New Moon projects and intentions – zeroing in on the ones that are most important to you.

You could be instinctively guided. Mercury and Pluto are each in a sextile to Neptune, opening their combo to inspiration, imagination, divine oversight, and compassion. Neptune’s not all rainbows and unicorns, remember. An open door to him is also a passageway for delusion, deceit, and gaslighting — which could, of course, come to light because of this equation.

Boldness is with you, if only you believe and accept it. And with the energy as feisty and impulsive as it’s been, you probably will, without giving it a thought. The Moon is in a sextile to Mars and Jupiter, the guy that gets us moving and the guy that ups the action. Their meeting in Aries is providing a once-in-12-year injection of Popeye’s spinach with a Red Bull chaser or three.

Gather info from dank, dark places. Investigate. Ask hard questions. Speak up. Dare. It could be incredibly motivating and healing, with the Moon sextiling Chiron in Aries. And let your New Moon intentions fly like dandelion seeds.