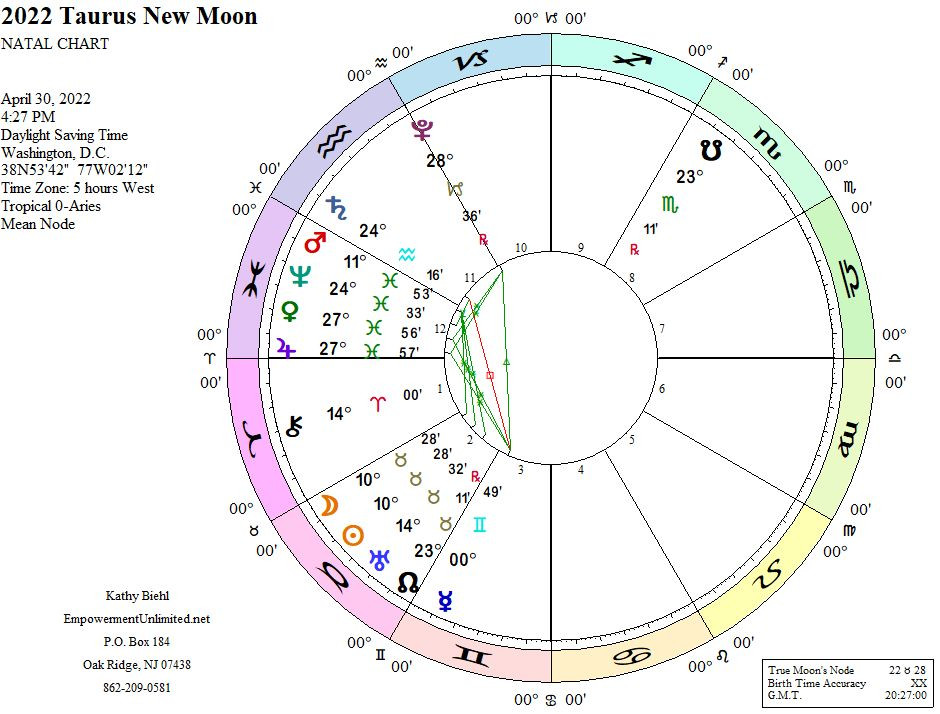 Fog is lifting. Clouds are parting. Anesthesia is wearing off. Confusion is dissolving into clarity. The Taurus New Moon Solar Eclipse is redirecting attention to the physical and hitting the reset button but good.

It’s the next phase in moving from the theoretical to the tangible. The first eclipse of the year, and a partial one at that, this one continues themes of money, resources and investments that surfaced at last November’s Taurus Full Moon Lunar Eclipse, which launched this cycle.

The Gemini/Sagittarius eclipses of the past two years demonstrated the real-world impact of words by revisiting and rewriting thought patterns, beliefs and communication channels. Now we abandon the theoretical and move to reexamining and reevaluating the material world itself, heavy on our cash and possessions.

This eclipse family was last with us from late 2003-2005. All of this year’s eclipses are on this axis, and they will continue through October 2023.

This New Moon is intense to an extreme. First, because of its nature as an eclipse, dimming the light partially, triggering primal animalistic reactions to that eerie spectacle, and blocking situations out of our lives in the process. Once the light comes back on fully, situations are never the same. They’ve been reset, like a computer after installation of a new operating system (and all the fine print changes that entails). In some cases they’ve been upgraded. But they are nowise business as usual.

Know, as we go into this, that choices lead to eliminations. Seeds planted and nurtured now by definition rule out other possibilities, with the effect that some situations in your life are changing permanently.

The second reason for intensity: The energy in the sky is so concentrated, with all the planets huddled on one side within about 120 degrees of each other. Most of the planetary population is in Taurus and Pisces, linking the otherworldly to the utterly earthly. Whatever launches now is going to have terrific practicality and focus, with a dose of something bigger.

Taurus is determinedly fixed, bullheadedly so, you might say. It exists in the here and now and experiences life through the senses. It wants to see, taste, smell, touch and above all hold (even, better, take to the bank). It does not like to hurry, nor to be told what to do, nor to let go.

Except it’s behaving more gently now. It’s being softened by the Pisces pile-up that has characterized the month, blending sociability and values (Venus), actions (Mars), optimism and inclination for more (Jupiter) and unhooking from the constraints of physical reality (faith, escapism, deceit, delusion, compassion and all the other flavors of transcendence coming off Neptune).

The softening and potential for inspiration and outright magic-making are extreme. The Taurus Moon’s ruler is in this mix, exactly conjunct Jupiter and both barely past conjunctions with boundless Neptune. Venus and Jupiter are influences of indulgence, encouraging immersion without restraint. They are supersizing awareness of others (including empathy and compassion), blurring boundaries and testing the shields of even the most conscious empaths.

As much as they want it all, Venus and Jupiter are gunning for intense and targeted experience, courtesy of a sextile to Pluto. Unconscious and cellular wants are stirring, some of which wander into the realm of compulsion, obsession and the less than socially acceptable. Recognizing deep urges now lays the groundwork for big opportunities to come when Jupiter’s sextile to Pluto, the only other major aspect between outer planets this year (besides the Jupiter/Neptune conjunction) becomes exact on May 3.

The formula promises wonders for creativity and artistic projects, as well as for improving the physical experience of life. Heaven-sent money? Angelic inspiration? They could happen. Thanks to the once-every-150-year pairing of Jupiter and Neptune, fairy tale machinations are indeed possible, more so than at any other point in our lifetimes,. Summon your inner Taurus and claim some for yourself. Dream ridiculously big. Make like Ted Lasso and put BELIEVE signs all over your house and office. Wish upon a star. Wish upon the entire sky.

Yet another reason for this New Moon’s intensity: Both of the cosmic change agents are at work, ensuring that new seeds ad phases don’t get stuck in Taurean languidness, but get off the ground, and how.

Echoing the volatility and unpredictability of an eclipse, quick-change artist Uranus is conjunct the New Moon. Uranus is zapping our hold on physical objects and situations and injecting unexpected, energizing and ultimately freeing forces.

It’s also ushering in the next phase of last year’s story line. Think back to last year’s ongoing restructuring and system testing. Where did that stand by December? The time is here to move ahead on it. You can harness the process and steer situations in your life, but a lot will happen without your conscious intervention.

The New Moon is at the degree Uranus occupied at its final exact square from Saturn last December. The square sensitized that degree, as if a trigger had been cocked. The eclipse is releasing the trigger, setting in motion huge developments that have been biding their time.

Profound messages are pouring in that assist with the process. We utter some of them; some come to us from outside sources and rehape our thinking. Some are revelations of secrets and hidden machinations that lend this solar eclipse the air of a lunar.

The cause is Mercury, ruler of communication, in the easy flow of a trine to Pluto, lord of the underworld and agent of unavoidable change. The trine is out of sign – Mercury is just inside the door to airy Gemini, with Pluto at the outer edge of earthy Capricorn – but the bodies are close all the same. Mercury is effectively at a standstill, too, less than a degree and only days away from his next retrograde, which runs from May 10 – June 3.

His uncharacteristic stillness creates the sensation of time slowing, stopping even, as information surfaces from deeper and deeper reserves, as if a drill is boring down into foundations. Your own thinking and communicating are evolving. The timing supports candor with yourself and others. The trine emboldens speaking up in ways and about topics that you’ve skirted.

Think of communication as working on the garden – identifying disease, weeding threats and making space for the incredible growth coming off this Taurus New Moon.

Learn more about this eclipse cycle in my talk Living In The Material World: The Taurus/Scorpio Eclipses of 2021-2023. You’ll get and understanding of the themes of the eclipses and how they are affecting each sign, plus a look at their impact on charts of selected countries and public figures.