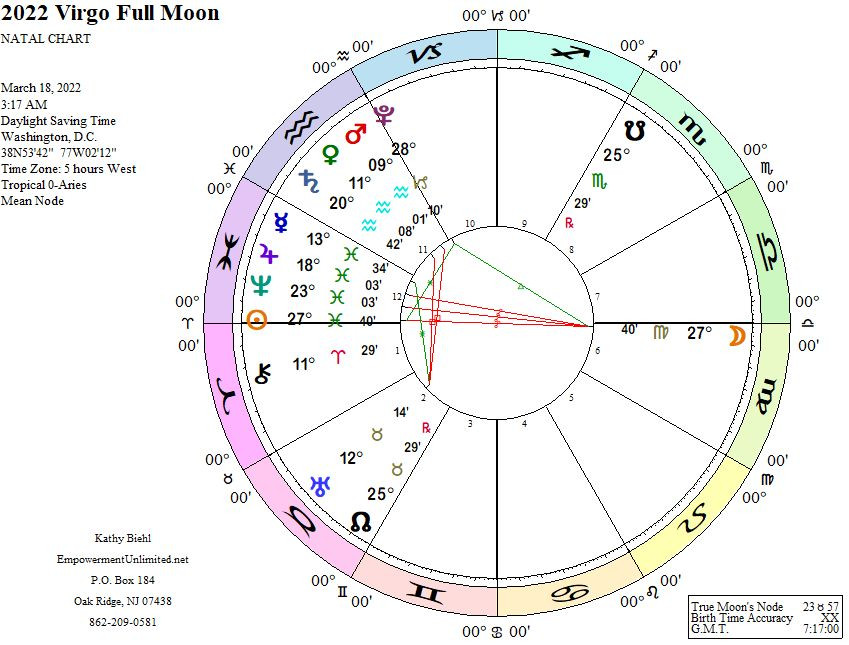 The clean-up crew is here. It’s conducting a thorough assessment of everything that’s happened in recent weeks. It’s analyzing the damage, the debris and the effect on boundaries, health and sanity. It’s drawing up to-do lists. It’s pouring out medicine and tonics. And it’s picking up the pieces. All courtesy of the Virgo Ful Moon.

This is a reason-driven, emotion-resistant Moon – under normal circumstances. It deals with practicalities, evaluating them with a critical, discerning eye that homes in on how they might be better. This bent does not make for comfort in a natal chart, but its innate objectivity can be welcome and useful in a passing moon phase. Particularly in the aftermath of intensity. Particularly in the aftermath of the level of intensity the world has been experiencing.

And weirdly appropriate to the label, half of what’s in the bucket is water. Four bodies in Pisces, including the Sun as well as the Moon’s and mind’s ruler Mercury, are a well spring of emotions that are aggrandized, boundary-blurring and non-rational to an extreme. They are scheduled to increase as the Moon wanes and Mercury meets with amplifying Jupiter and transcendent Neptune.

Roles are reversed. The archetypally sensitive Moon is logical and deliberative. The archetypally logical Sun is awash with emotions, and not just our own. They’re misty and unmoored from physical reality, wafting off nearby Neptune, which the Sun joined March 5. The cosmic fog machine is muffling our intellects with sorrow, compassion, fantasy, delusion, and escapism in its many forms. No wonder, with what we’re soaking up: Telepathy and empathy and co-dependency are flowing, with Mercury in Pisces connecting us below the level of language.

It’s overwhelming, but the Virgo Full Moon has the stuff to take care of that. As situations hit a peak, this Moon is at the ready with mops and towels and wet vacs, to deal with overflow and aftermath. The Moon has allies that intensify and focus the releasing properties inherent in a Full Moon.

One makes the messes more dramatic and the clearings deeper and permanent. The Moon is exactly trine to Pluto, the destroyer, the lord of death and rebirth, the ruler of secrets, treasures and other hidden things. The Full Moons since October have been at 27 degrees of their respective signs, directly contacting this fierce influence.

This is the last of the sequence, and like November’s Taurus lunar eclipse, the energies team without impediment. We’re emotionally processing – but with the aid of objectivity and critical thinking – the deep level changes we have been experiencing, individually and collectively: revelations and exposures of secrets, abuses of power, betrayals, corruption and forces operating behind the scenes or in our subconscious.

It’s worth thinking back to November, when the current eclipses began on the Taurus/Scorpio axis revisiting and resetting resources and investments. What we’re dealing with and disposing of now may connect to revelations, departures and chapter endings that started then.

Cleaning up, cutting out and throwing out are natural and organic. This teamwork is at your service and will simplify a lot in your life (so work with them already, why doncha?) Use their precision to redraw boundaries and remove unhealthy situations. Some are going without your intervention, but there’s no reason you can’t wield the scalpel yourself.

The process has a decided evolutionary and fated overtone. The Moon and Pluto are in a grand trine – an unbroken round robin of energy – with the north node, representing the path forward. Cleaning house emotionally isn’t merely lightening our load, based on redefined values and desires. It’s moving us.

Amid the logical and clearing and clouds of … whatever they are, watch for bursts of firepower. Venus, ruler of all we desire and value, is sextile Chiron in Aries. She’s newly honed from her meetings with Pluto in the past three months, and newly empowered by traveling for weeks with Mars, planet of action. The opportunity aspect opens doors to neutralizing – or making a new arrangement with – wounds associated with leadership, having to act alone / not being able to delegate, taking individual risks and the masculine. The sextile offers the possibility of bridging the masculine and the feminine, boldly working together for a communal or progressive good.

Take the sextile’s offer or not. The Moon’s purge and release vibe gets an assist the following day, when Venus squares Uranus. The impact rattles a lot losse and unleashes breakthroughs, breakups and disruptions in relationships and desires. Friendships could be especially affected, as if a cosmic sorting hat is at work and reassigning allegiances.