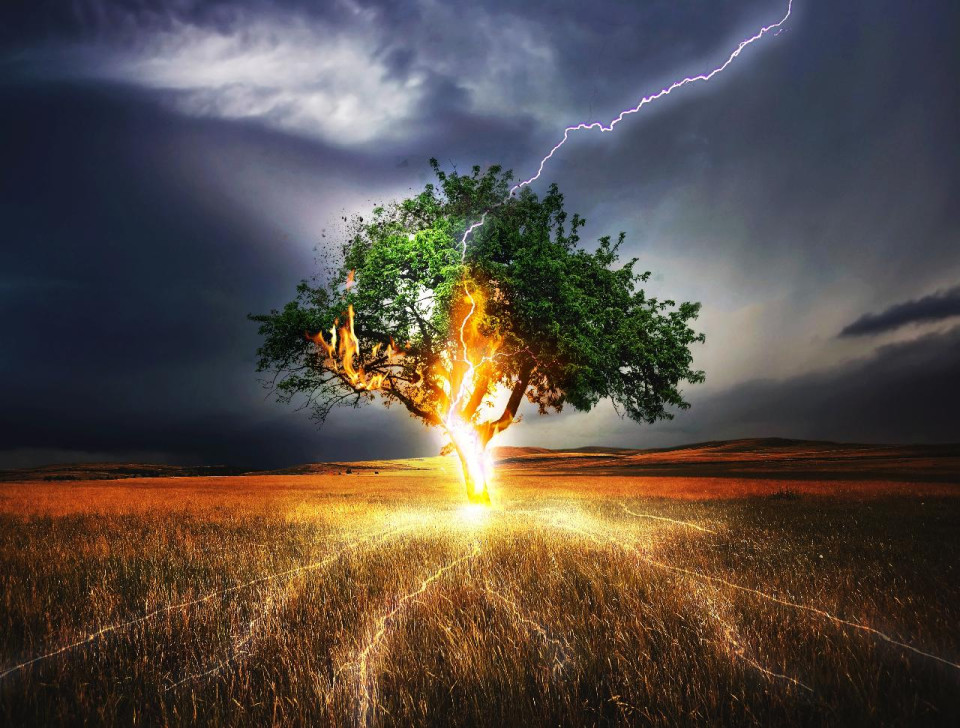 This year’s Virgo New Moon births a fresh start with a twist. Lots of twists, actually.

It’s shot through with practical, effortless, organic innovation and, possibly, even genius. It is harnessing the lightning that has been shocking and disrupting and freeing us all year, and zapping seeds and plans with its electrifying energy.

The effect is a bit like high voltage sparks bringing Frankenstein’s monster to life, except what’s awakening now isn’t a mish-mash of parts that have died, but natural and new growth – unconventional, even a bit weird, but without the menace.

It holds the potential for excitement and innovation. Movement is both possible and probable, just not exactly as you may have been envisioning.

The New Moon is in an exact trine with Uranus, agent of radical, sudden, unpredictable change and advocate for alternate viewpoints. The aspect weaves his influence into everything developing during this Moon phase.

Somehow, it feels right. His out of the blue, tilting influence is oddly compatible with Virgo’s bent for improvement, boundaries, organizing, analysis and details.

For one reason, Virgo is always looking for betterment, effectiveness and efficiency, and all of those are up for unexpected form, routes and solutions now. Epiphanies and bolts from the blue are showering on the Virgo areas of our charts, casting a different light on situations and opening possibilties that we hadn’t previously perceived or that weren’t ripe before.

For another reason, the Virgo Moon’s ruler, Mercury, has a pre-existing affinity for Uranus. Both planets rule the mind, with Mercury in charge of ordinary processes and Uranus representing the higher ones. They are currently connecting in an inconjunct, an aspect that requires adjustments – in this case, through thoughts, information or insights. The adjustments are occurring abruptly, as if an unseen hand is flipping a switch.

Set goals and intentions. Make plans. And be open to wild and woolley chance. Dream outrageously big in the process; you might get something close to what you want, or maybe even better (if unexpectedly so).

The two rulers of indulgence are in cahoots, with love goddess Venus in a close trine with beneficent, amplifying Jupiter. The contact is beaming good vibes into relationships and creativity and making desires mushroom.

And yet it’s not all sunshine, lollipops and rainbows, and the parts that are call for doing something about that. While Venus is being egged on by Jupiter, another influence is addressing – or at least stressing – some of her more idealistic, romanticized or delusional wants. Venus is in an adjustment aspect with her co-ruler of love and creativity, Neptune. The aspect is gentle and evades grasping or meeting head on. You may be called upon to look more kindly or compassionately on a relationship. You may get a nudge to take your head out of the clouds or clean your glasses. You may, just as possibly, find yourself bringing more fantasy or inspiration or magical thinking into desires and relationships.

Also complicating the picture; some of those desires are subterranean, compulsive and not as pretty as Libra would like to admit. Venus is in an action-demanding square with Pluto; since the two rule both desire and money (normal human levels and BIG), the stakes are high. Secrets have been coming out. Triangles or inconsistent allegiances are especially in the spotlight, and you may be forced to choose one and cut out the other.

There’s no straight line between desires and fulfillment, though. Adjustments are necessary in how you go after them, with action hero Mars in an inconjunct to expansive Jupiter. Some adjustments are big; some increase the number of steps needed; some might require expanding your scope or calling in reinforcements. With this Moon involving both Uranus and Jupiter in Uranus’ home sign of Aquarius, upgrading or adapting technology could well be factors.

Set your sights. Tend your garden. Make your to-do list and leave space for the unexpected. Invoke the standard manifesting language, “This or something better.” The “something better” part is what this New Moon is delivering. At minimum, it’s delivering something different.