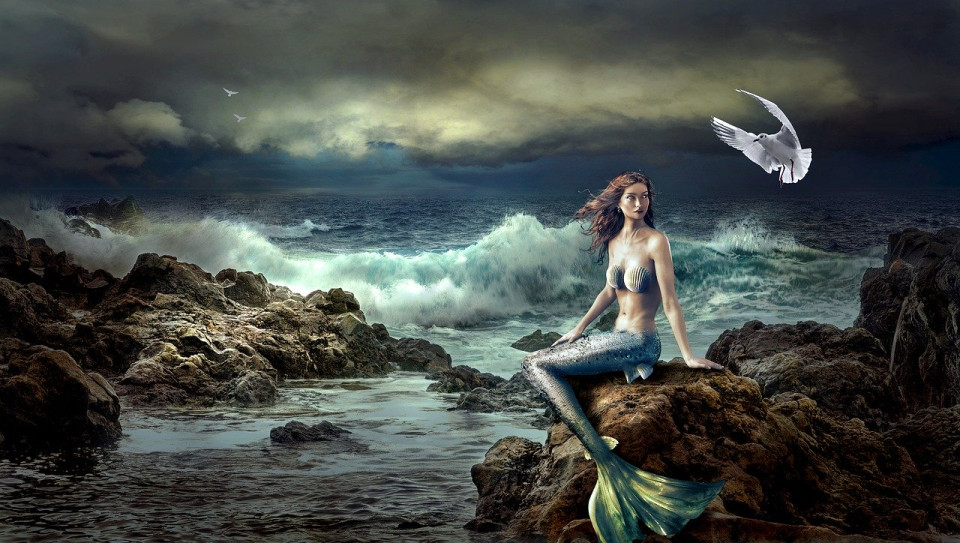 How’s your emotional experience these days? Are you sure it’s really yours? You could be soaking up anyone’s and everyone’s under the Pisces Full Moon.

Are you floating? Feeling adrift? Lost at sea? Shipwrecked? On the brink of going under? All of the above? You can thank the Pisces Full Moon for that as well.

Emotions are rising and cresting now, as they do under any Full Moon. This one has an uncommon and paradoxical character, though. It simultaneously dissolves boundaries and creates distance. It washes us into a vast, gentle sea and zaps it with lightning. It confuses and dazes and delivers awe.

The Pisces Full Moon is providing time and space to experience emotions rising and falling like the tides. There’s a lot to observe. Think of the activity, and your reactions to it, since the Leo New Moon two weeks ago, and it may feel like a lifetime since the Pisces New Moon six months ago. Have you had time to breathe, much less process? Take that time now. Mars, instigator of so much, is slowing to retrograde, and the brakes on him make it easier to process, to notice what’s in the water with us, and to take a pool net to unwelcome debris. Or get out of the way when some outer force jerks it away.

This Full Moon gives incentive to stay put, distance to observe and jolts that awaken a different perspective.

Pisces is the most boundless, uncontainable sign of the zodiac. It’s a realm of poets, artists and mermaids, of illusion and fantasy, of mystics and madmen and martyrs, of saints and swindlers. It doesn’t answer to boring old bill-paying reality, but surrounds and buffers it with the interconnectedness of all existence.

Its ruler is Neptune, lord of the sea and keeper of the cosmic fog machine. His influence has permeated and softened the ongoing foundational restructuring that’s been coming from Jupiter, Saturn and Pluto working over the last degrees of Capricorn.

Neptune is still engaging with Jupiter, the sky’s most expansive influence, the guy who pumps up any action he’s near. The two have a natural affinity; Jupiter is the traditional ruler of Pisces, a role he played before Neptune was discovered. The two have been traveling this year in the opportunity aspect of a sextile, which opens a doorway to heightened compassion and inspiration, as well as to deception.

Their teamwork is available for emotional processing now. Ask for guidance. Look for silver linings. Ask for forgiveness, for compassion and for redemption. If nothing else, use it to reach some personal resolution. It’s also a huge boon for creative inspiration.

But do use it. It won’t be exist much longer. This doorway begins to close in October. When it shuts by December, it will not open again in our lifetimes. (Jupiter and Neptune will sextile again, but not with Jupiter in Capricorn and Neptune in his home sign of Pisces.)

The sextile compliments the two other major aspects that are taking place under this Full Moon. The Moon is herself in an exact opportunity aspect, with Uranus, agent of unpredictable, volatile change, in the decidedly earthbound sign of Taurus. He is the source of the lightning zapping the sea of existence.

Epiphanies and changes of heart are possible, as if an unseen switch has flipped. If you catch sight of the lightning, or if you cross its path, you may be released from a boundary problem – broken free of codependency, or an addiction, being engulfed by someone else’s situation, being engulfed by the woes of the world. (Been taking refuge in a bottle of wine of late? It could lose its appeal.) Liberation comes in ways that you could not have anticipated, and that may not feel uncomfortable. Yet it will blast you out of symbolic waters that aren’t really yours.

Watch for sudden insights and openings in relationships, financial matters and issues about self-worth and values. Their ruler Venus is exactly opposing stern Saturn, ruler of structure, responsibility, commitment, accountability – basically, the influence that requires behaving like mature adults and imposes consequences when we don’t. This aspect is making us acutely aware of distance and separations. What does your heart really want? Is not being able to have something making it desirable? Would you embrace and respect it if it were at hand?

The combined effect of these aspects is a gift for anyone who’s been in a fog or confused. Are your feelings real? Is a relationship real or fantasy? Have you been fooling yourself? Has someone been throwing pixie dust into your eyes? Or gaslighting you? Soak awhile in the waters of the Pisces Full Moon and watch what’s going on around you. Ask for insight. Welcome lightning. And open and empty your heart.

Listen to my free talk Reclaiming Your Energy to understand how much you’re picking up from other people and experience a quick technique for clearing it.