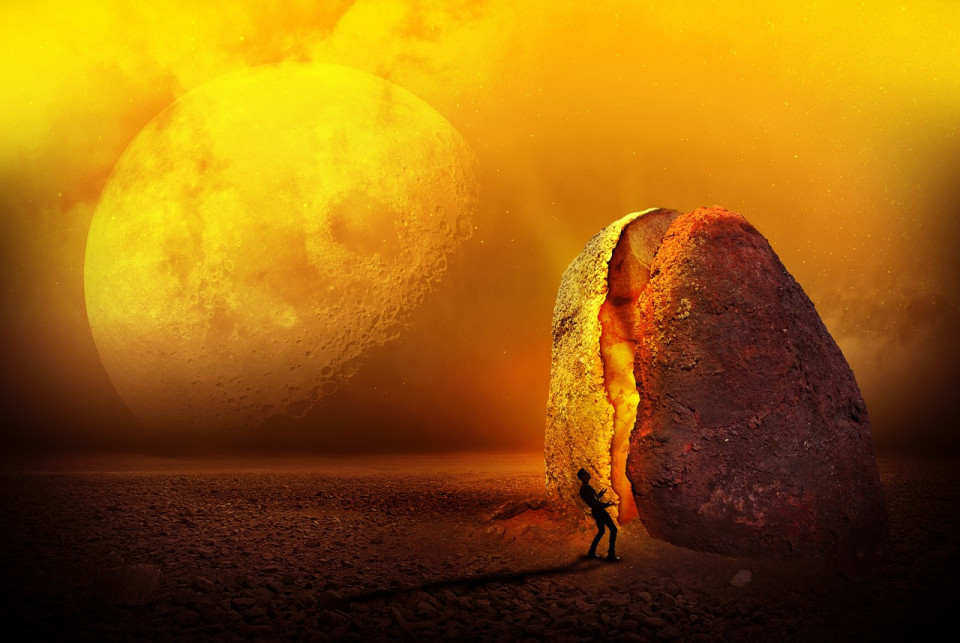 Relationships are up for attention under the Libra Full Moon. Like so much else right now, this Moon isn’t acting as it has previously. Instead, its relationship focus comes with a twist: returning emphasis to the individual.

A Full Moon always brings situations that have been building to a noticeable crescendo. The process pits competing factors against each other that are hard to harmonize: the rational against the non-rational; the masculine/assertive against the feminine/receptive; the personal against an outside interest or condition.

A Libra Full Moon lights up the tenuous see-saw of interacting with another person. This lunation can be a time of “Can’t we all get along?” (Libra loves harmony, or at least pays it lip service.) A particular connection can come to the fore, pleasantly or otherwise. The Moon’s cresting developments can demonstrate the terms and fine print of particular agreements, and/or the rules that you follow in relationships in general.

Reactions will not be subtle. Or necessarily gentle. This Libra Full Moon comes with potentially explosive awakening and liberation. Mars, ruler of the Aries Sun, is exactly squaring Uranus, and the impact demands action, sudden and impulsive. Mars is the god of war, the embodiment of the masculine archetype and the ruler of how we push ourselves forward. Uranus is the rebel, the agent of unpredictable, awakening, liberating change, and the advocate of alternate viewpoints – except that when squaring Mars he doesn’t so much advocate as knock your POV on its side.

The niceties that Libra prefers have little chance. Simmering frustrations are boiling over. Emotional grenades are detonating. Anger, passions, resentment, rebelliousness are exploding. Risk-taking runs rampant. Things could break: devices, technology, the Internet, satellite systems, public funding, food distribution systems… Friendships and relationships and networks could break, too, but they could band together in innovation and common rebellion as well.

Yes, there could be violence. A lot of people will hit their limits with the inescapable traumatic stress of our current conditions – uncertain, anxiety provoking, threatening and unprecedented. Situations that can’t go on any longer, at all, will blow up. And the force will break fixating on the Other and point focus squarely on yourself, your singularity, your solo experience of life during this strange time.

The Queen of England demonstrated that this influence can play out lovingly in her April 5 speech. The statement was one of only four or so in her lengthy reign. The complex geometry of current astrology is all over her action, sentiments and word choices. Uranus is atop her Taurus sun, so Mars is squaring both, triggering action that broke from her norm and that addressed her community, presented a vision for the future and employed technology. Watch her speech at BBC.

The aftermath promises to be surprisingly healing. Even simpatico.

The healing has two components. One comes from adjustments that wipe the mist from our eyes. A tight inconjunct between the Moon and dreamweaver Neptune is tweaking the seesaw and forcing riding it differently. If we have been romanticizing a connection, if we have been coloring in all the vague parts with our own expectations and visions and dreams, this Moon is removing – or calibrating – the illusion. A relationship could crumble into dust; it might sparkle all the brighter without having your projection foisted onto it. If we have been judging or having a negative experience of someone, this Moon is tilting us toward compassion, forgiveness and a stance closer to love.

Neptune’s influence sneaks up, washes over situations, and dissolves. It might midwife an adjustment through a dream, through a song, while you are streaming a movie or musical. You might open your eyes one morning feeling differently, as if something faded or melted away in your sleep. \

The adjustment could play into the firebursts Mars and Uranus send off. That could translate into soothing the impact. Or it could trigger explosive action, as it dawns on you that you’ve fooled yourself, or have misread a person, or have been tricked. (Gravitate to the healing, compassionate, forgiving potentials in this inconjunct.)

The other component of healing is on offer between Mars and Chiron, who represents the challenge of mastering physical, human existence. The masculine has an alternative. It can respond to Uranus’ lightning by changing perspective, by embracing and then acting on an epiphany, and from that by transmuting full-tilt aggression and competitiveness into innovative action – fighting perhaps for a communal, greater interest, fighting for the future, not treating a situation as someone wins and someone loses. And directing energy back to the self and to what it can do, now.

Paying attention to yourself and to your side of a relationship equation ends up bettering everyone. The other person will or will not deal with his side of the table. You’ll be less affected by the choice or lack of it, because you’ll be focused on yourself and not spending energy worrying about or projecting expectations onto the other person – and possibly walking away for good depending on what’s been unmasked. (Bridges will be burned. Bridges will be fire bombed.)

Back to the point: paying attention to yourself ends up bettering everyone. You’re not burdening the relationship, or the other person, with expectations, or even with energy. Your energy is going into you, and your life. Everyone has room to breathe, and to grow, and to grapple in their individual way with these extraordinary circumstances. (They’re not going away; Jupiter is still traveling with Pluto and amplifying the evolutionary change we’re all undergoing.)

And you won’t, oddly, feel alone. And probably not even bad, when the dust settles. What remains is great. First and foremost, you. Venus, goddess of love and ruler of all we desire and value, is in the flow of a trine to Mars. She voices desires (and with her in Gemini, she’s definitely chatty); he does her bidding. The cosmic lovers are in sync, and friendly as can be. And friendly is pretty much all they can be, within the constraints of social distancing and shelter in place requests. We’re making do. The inner masculine and feminine are getting along, and that translates into socializing – unconventional, hands free, and enlisting technology to stay in touch.

It’s often said that relationships are mirrors. This Full Moon shows that unmistakably. It nudges us to wipe the fog off the glass and look at what’s really looking back. A mirror may crack; a mirror may break. We are left with the self. And claiming that is the gift of this turbulent Moon.