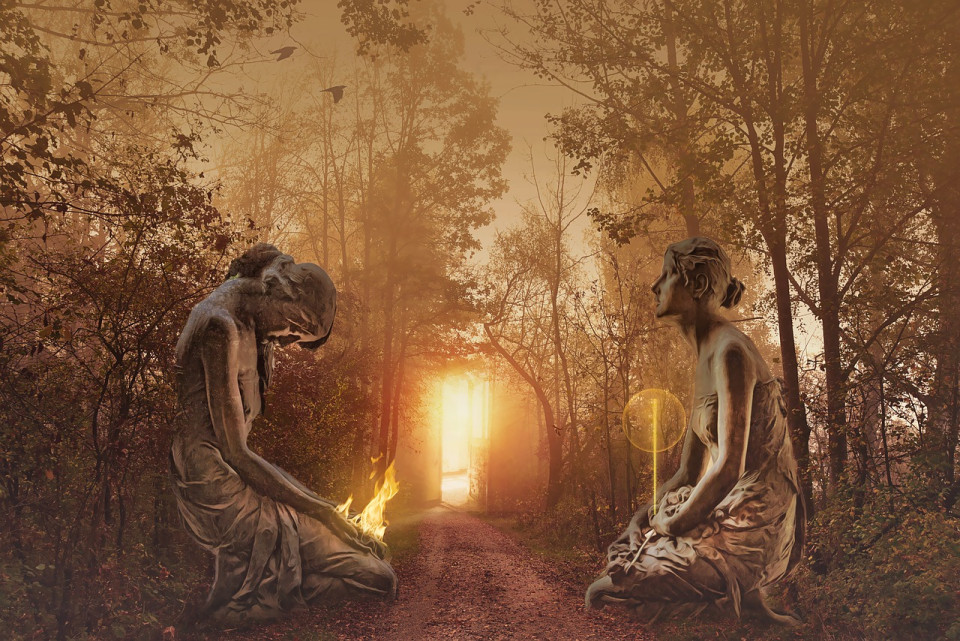 April poses the question, “What now?” then forces out answers. And we’re not likely to respond alone, even with social distancing.

The intensity that’s been building for weeks reaches a peak as the month starts. Everything is at maximum, from paranoia, unsustainability, corruption, structural and institutional collapse to evolution in power, leadership and authority, reprioritizing and simplifying.

With relentless and seemingly unstoppable drama, it’s easy to fixate on current developments as negative. It’s more helpful, though, to view them as stages in an evolutionary process that has been going on – behind the scenes, below the surface, in our periphery – for years. Now they are emerging into view, reshaping our lives, society and world. We can no longer ignore the process, but, as April will show, we can adapt, and even improve.

Expansive, indulgent Jupiter is making the first of three exact links to Pluto, lord of death and rebirth, on April 4. They are amplifying and intensifying the collective and individual paradigm shift that crystallized when Pluto met Saturn, the lord of structure, responsibility and the status quo, on January 12. While Jupiter is making everything bigger, sometimes cartoonishly so, keep in mind that he also has a knack for silver linings (so look for the benefit, however hidden that may seem at the moment). And that Pluto brings a process with regeneration and renewal (however hidden that may seem at the moment).

April lands us at a noticeable stage in that process. The first step in any three-part dance with Pluto, as Jupiter is doing now, is like a steam shovel dumping what it’s excavated. We can see and inspect what has been broken up and dug up. At the second step of the dance, when Jupiter returns to Pluto in June, we consider what to do about the rubble. We decide and take real action at the third step, when Jupiter and Pluto make their final conjunction in November.

The month delivers many different vantage points for viewing and considering the rubble. Our social interactions provide some, and changes in communication and information flow provide others. What brings this about is the journeys of Venus (love goddess and ruler of all we value) and Mercury (ruler of communication and transportation). Both change signs and mode of expression during April, and both have important experiences on either side of the sign changes.

Each shift in mode is preceded by hard contact with the amplified restructuring of Jupiter and Pluto, which are in the late degrees of Capricorn for most of the rest of the year and standing in front of the exit door. Once through that door, each of April’s shifts in mode quickly makes hard contact with two gatekeepers in early degrees, stabilizing Saturn in Aquarius and destabilizing Uranus in Taurus. The result is a predictable, trackable progression: an area of mundane existence being massively affected by the extremes in restructuring, then finding some stability, then being shaken up by plot twists or awakened perspectives.

April begins with sharpened and refocused desires and sociability (Venus) and motivation and drive (Mars), which went through the Jupiter/Pluto grinder at the end of March. Our drive, energy and tempers are the first to encounter lightning and discomfort, when Mars squares Uranus April 7. The aspect is a demand for action, from the planet that rules exactly that. Frustration and anger are likely responses, and this may be when a lot of people chafe and balk at staying at home or not being able to conduct business as usual. There are, of course, other options. This may also birth unconventional approaches and technological innovations.

Relationships feel the hit. The square takes place on the Libra Full Moon, which brings relationships to the fore. Look for messages and openings to communicate profoundly and deeply about our revised state of affairs, with Mercury sextiling Jupiter and Pluto that same day.

Otherwise, our dealings with each other promise to be surprisingly smooth. Venus and Mars are in compatible styles for the moment. Both are in air signs (Venus in Gemini; Mars in Aquarius) and encouraging intellectual connections rather than physical, which actually supports the social distancing that has accompanied Saturn’s move into Aquarius. Technology plays a role. Watch for more and more online game playing, cocktail parties, watch parties and other gatherings.

Minds, talk and info rev up when Mercury enters feisty, impulsive Aries April 10. Even though this is leap without looking territory, we have the possibility of communicating responsibly, or of information providing stability, when he sextiles Saturn on April 11. (The concept of community spirit or the greater good may be a factor.)

Mid-month has each of us confronting the personal meaning and impact of our extraordinary times and circumstances. The Sun’s square to Pluto and then Jupiter brings hard and inescapable truths home April 14 and 15 – but also pushes us to step up and evolve. What can you shed? How can you embrace power and dominion over yourself, regardless of whether you can shape what’s going on outside?

As personal as that evolutionary contemplation is, we emerge to possibilities of pursuing something we value and desire, of not going it alone, and of making progress with or benefiting others in our networks. Or at least, of thinking and talking about all this, with Mercury in opportunity aspect to Venus and Mars.

Watch these impulses morph from intellectual discussion to cellular desire for something more tangible. Physicality takes on an insistent appeal when the Sun moves into Taurus April 19 and squares Saturn two days later. By the Taurus New Moon on April 22, a new phase dawns in our experience – and appreciation – of the physical aspects of life. The shutdown plays into this, whether it is ongoing or not. Your experience of time may be slower; you may be more in the present than you were previously. And that will affect the metaphoric garden you are tending at this New Moon.

Whether you find yourself balking at social restrictions or not, take these Taurus events as a call to focus on sensory experience: Enjoy the outdoors. Slow down when eating and pay attention to textures and tastes. Look for local food sources; start growing some of your own, maybe. Listen to music. Wear fabrics that feel good on your skin. Hug a stuffed animal, or a pet, or, if circumstances are such that one is near, a dear person.

The skies soon disturb the idyll. Thoughts, messages, ideas and conversations rivet on inexorable, inescapable changes when Mercury squares Jupiter and Pluto on April 25. Pluto begins a nearly five-month retrograde the same day, and his pivot stirs uncomfortable truths, secrets and power moves. We may be thinking again about what’s most important and cutting out debris and clutter. Conversations may be uncommonly candid and pack a surgical impact.

The aftermath is startling, awakening and potentially liberating, as the Sun squares Uranus April 26. You may feel suddenly sprung from prison. You may look at yourself or your life or life in general completely differently, as if someone has flipped a switch.

Our communication mode then downshifts into the practical, concrete, here and now. Mercury enters slow and steady Taurus April 27 and challenges Saturn in Aquarius two days later. We aren’t blurting whatever bubbles up, without filters. We’re more conscious of turf and cost and most importantly, what is ours. The square to Saturn pits our expressed desires against restrictions or perhaps communal need. People could voice getting fed up with distancing, or could communicate practical solutions and approaches. (Serenading from the street to someone in a balcony would fit this.)

And then, surprises and electricity surge and break open the new. The two guardians of the mind, Mercury and Uranus, meet on April 30 and unleash strokes of genius with down to earth applicability. Prepare to be amazed.

Learn what Saturn’s time in Aquarius means for you, society and specific countries in my talk, live April 5 and downloadable afterward.