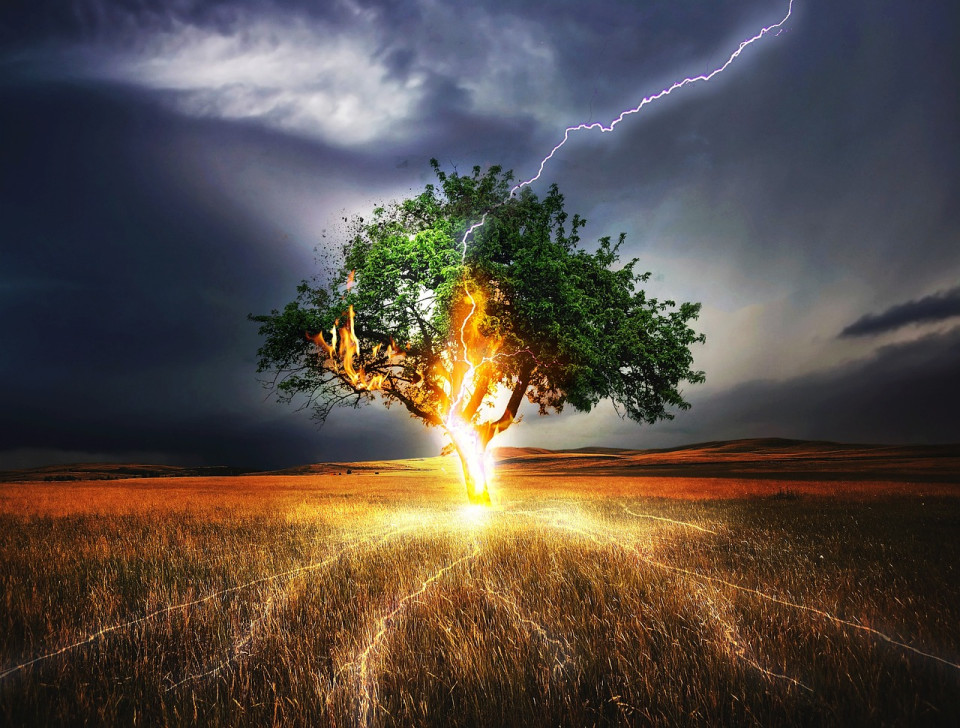 May is brought to you by the planet Uranus – the cosmic quick change agent and awakener, who throws lightning bolts, monkey wrenches and plot twists, who breaks locks and prison walls, who argues for alternate viewpoints (and sometimes unleashes them), without warning.

The month promises to be hopping, erratic, exciting and full of the unexpected. It has a definite pattern too: breakthrough, an opening to higher guidance and understanding (which we may or may not take), grounding and then transforming. Rinse and repeat.

Uranus is still settling into the slow, solid, show-me energy of Taurus (as much as his crackling energy ever really settles). This month brings evidence of how he is changing our physical conditions and what that means for the next seven years. Company’s coming to visit him now, and all our daily interactions are vibrating like power lines humming with activity.

First up is the Taurus New Moon on May 4, with relationships pushing for structure and commitment (Venus approaching a square to Saturn) and higher love and compassion watering the soil (via a sextile from illusionist Neptune).

Next is our style of communicating and getting around, which slows into the concrete, practical and sensual when messenger god Mercury trundles through Taurus from May 6 – 21. Relationships, values and financial matters follow with a similar turn, when Venus, ruler of all we hold dear, comes home to the sign for a month starting May 15.

May 8-9 brings startling, unexpected and game-changing information, messages, puzzle pieces and disruptions in technology or travel. The catalyst is Mercury’s super-conjunction to Uranus (by degree and by declination). Since both planets rule the mind – Uranus is like Mercury’s crazy uncle, or Rick to his Morty – life may feel like a lightning field, with flashes of insight and genius erupting all over the place.

The buildup to their meeting (especially in the month’s first week) may shed light on, or perhaps further, the forceful gear shift that accompanied Uranus’ first move from Aries to Taurus in the middle of May 2018. Some of what erupts around May 8-9 may relate to late August 2018, when stabilizing Saturn trined Uranus at the same degree as this month’s conjunction and put containment on a budding notion or project.

Hearts and financial dealings then go through a similar process. Mid-month has them calling back to the same time last year. People, relationships, projects, deals are coming onto the scene, or blossoming, because of last May’s liberating chaos. Frustration and impatience could usher them in. New forms, new connections, different approaches, unforeseen possibilities proliferate like mushrooms after a rainstorm, when Venus and Uranus meet by super-conjunction May 18-21. This is at the same degree as Mercury’s conjunction 10 days earlier, so current developments may link to late August 2018 and the stabilizing trine Uranus received from Saturn then.

This conjunction overlaps with major processing of what went down a week to 10 days earlier, during Mercury’s meeting with Uranus. Almost simultaneously, as Mercury trines Saturn and Pluto, messages and minds grow more confident, certain and grounded – and then more honest, focused and intense. Emotional cresting is likewise intense, clarifying and probably purging, since Venus’ meeting with the changemaker also coincides with the Scorpio Full Moon, which is always an emotionally dramatic event on its own, without help from the rest of the sky.

Short attention spans take over almost immediately on May 21, when the Sun and Mercury enter Gemini and merge. The noise level increases; minds and mouths and fingers and feet dart here and there; social media and phones blow up with activity.

The carousel of diversions may provide welcome relief from the previous weeks’ disruptions and intensity. The lighter atmosphere may also give plenty of cause for laughter and play, which could also be a needed and healthy break. And it primes us for taking opportunities to try the novel and mow down barriers (with a barrage of data, arguments and laughter) as Mars sextiles Uranus on the 22nd.

Underneath all the activity, operating as a background program, are the slow, steady, relentless retrogrades of Saturn and Pluto working over the South Node in Capricorn. That point is the doorway to the past and what we’re leaving behind, and the two old gods are continuing to clean out and remodel, once again, our infrastructure, foundations, institutions and tribal/ancestral programming.

By month’s end the air has an escapist vibe, with Mercury and Venus contacting Neptune. Thoughts wander back into fog and illusion (and may force out deception). The door is open, though, to inspiration, love and magic. Whether you walk through or not, stability awaits. The breakthroughs and quick changes of Venus’ meeting with Uranus find containment, structure and commitment when she trines Saturn on the last day of May. Watch for calming, solidifying, reliable and bankable developments in relationships and financial dealings. April showers (this year’s and last) have brought May flowers, indeed.

Meet these energies head on via my Uranus in Taurus guide and guided visualizations:
Meeting Uranus
Working with Pluto
The Bonfire & the Gateway (Saturn and Pluto)
Starship Maintenance & Repair