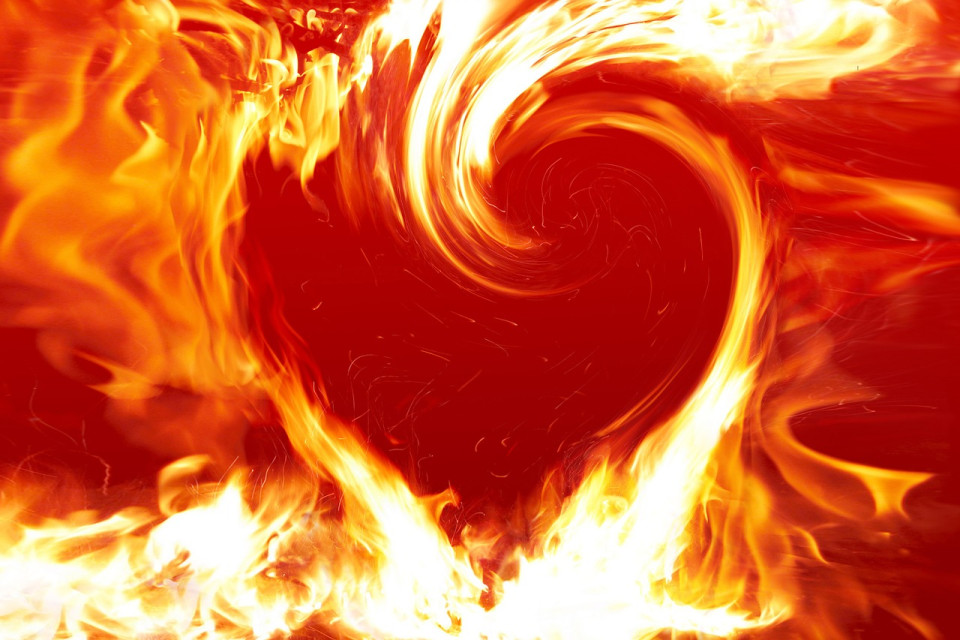 “Words have been exchanged enough; now at last let me see actions! “ So speaks Faust in the play by that name by Johann Wolfgang von Goethe. And something along those lines is occurring to all of us now.

The Aries New Moon ignites self-reliance, standing up for yourself, taking risks and taking action, instinctively, without indulging in overthinking – or thinking at all. And then, after spurring us to action, demands that we be adults.

If you’re weary of Mercury retrograde’s lingering effects, or the fog that has been cloaking the news, atmosphere, our perceptions and life in general, take heart: we are busting out, fog or not.

This “just do it” Moon hits like a surge of adrenaline, or a case of energy drinks, or a cosmic cattle prod. It’s as if an alarm clock is going off and we’re hitting the ground running.

Aries burns with primal life force, as the first sign in the zodiac and in the astrological year. Two uncommon factors are making the fire flare in this year’s New Moon in the sign.

The Sun is inflamed by his first contact in decades with Chiron in Aries, which is kindling wounds in the masculine and awakening the warrior within. We come into the New Moon riled up, bristling, perhaps trigger happy, perhaps prone to overcompensate, and definitely chomping at the bit.

We don’t have to be at the mercy of wounding, though. Mars, planet of push and the ruler of the Aries Moon, is in an opportunity aspect to Chiron. The courage is on hand to act for ourselves and enter the fray. Bold action may turn out to be therapeutic. An opening may well arise that you dash through without hesitation – although you may experience stage fright after the fact at the realization of what you have just done.

Too, a cosmic imperative to get moving already is wired into this New Moon, which burns with a sense of fatedness and inevitability. It ‘s exactly squaring the Capricorn New Moon solar eclipse that launched the year. A powerful new phase dawned then, resetting and upgrading goals, structures, foundations, institutions and more. In what direction were you looking then? Time to hurry forward, as this New Moon shoves, kicks and generally less than subtly moves us further down the path.

We might not maintain high speed for long – or get far. Something will quickly measure our pace. The path leads to signs that say “Caution” or “Slow” or “Stop;” to a “hurry up and wait” frustration; to walls and “No” and – more immediately positive (because all obstacles could ultimately prove positive) — to structure, order, and grounding our fiery impulses into something real and tangible.

The cause is the Moon’s challenging aspect to Saturn, the taskmaster, planet of adulting and ruler of responsibilities, order and commitment. We may burst out of the corral like a colt, but almost immediately encounter a force that requires maturity and taking this direction seriously.

Consider the signs, the challenges and this force carefully. They’re coming with long-term ramifications and heavy-hitter companions.

Saturn is traveling with Pluto, agent of unavoidable change and overseer of all that is hidden. The lord of structure and the lord of restructuring are laying the groundwork (or demolishing it, as the case may be) for their life-changing meeting next January.

This stage in the construction/deconstruction involves routing out the past. That task is unavoidable now. Saturn and Pluto are sandwiching the Capricorn South Node, and their square to the New Moon pulls it directly into the process.

The Nodes pit the call of the future (nurturing ourselves and tending to home and family) against the ways of the past (foundations, institutions and conventions) and that we are leaving behind. The New Moon is receiving pressure from each end, as the focal point of a t-square, but the pressure isn’t equal. Saturn and Pluto are weighting the past and demanding attention to it – not just at this New Moon, but throughout the entire month.

That tension is another reason for the New Moon’s forcefulness, like a lid blowing off a pressure cooker (the precursor to the Instapot). The release of pent-up energy has to go somewhere – and in this instance, it’s heading straight for relationships.

Impulsive risks, approaches, leaps, strikes and pounces result in some cases; in others, assertiveness, free-agent action or combativeness. The common element is engaging.

Whatever has been percolating, in you or another, will be making itself known. If you have been mulling over a particular project, impulse or person, this New Moon has the stuff to move you forward on it. Be prepared, though: something solid will result.

That’s a risk worth taking. You won’t know without trying.

Work with the energies of Saturn & Pluto in my guided visualization The Bonfire & The Gateway.

Image by Gloria Williams from Pixabay