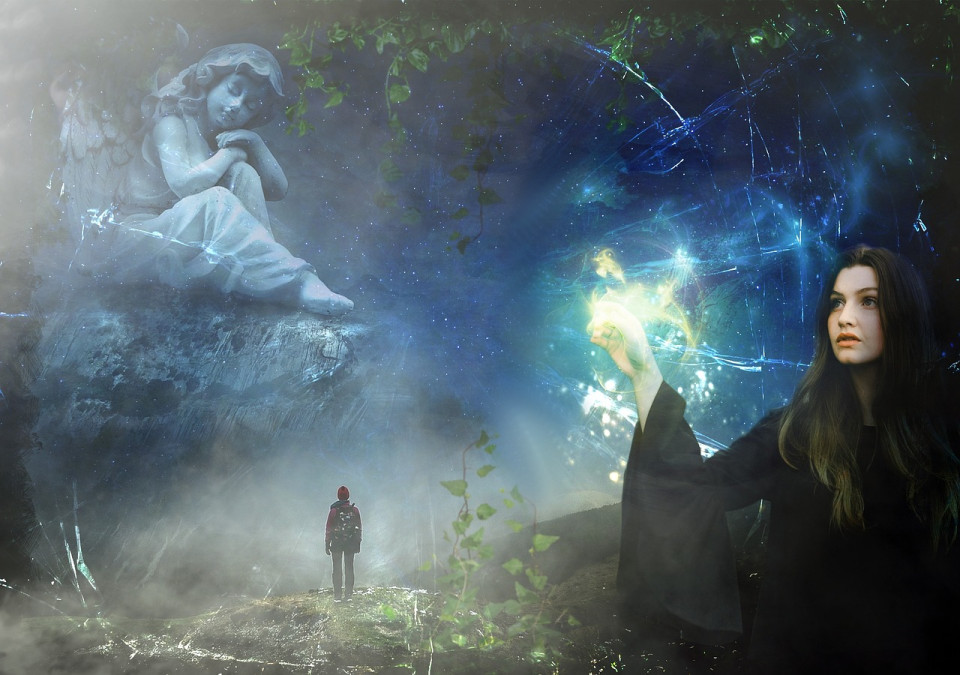 Venus is in charge, in her sexiest, witchiest mode.

We’re in for intense, passionate connecting and sharing of secrets (and more). And more exposing, confronting and exploring issues of sex, power, big money, hush money, dirty money and the not always peaceful coexistence of women and men.

The goddess of love and money is calling the dance. Her needs and desires mold the action fromevery possible direction, with her ruling both moons and stepping into the retrograde spotlight. Her reach extends into the past, into next month and to the end of the year.

Mists of glamour, magic and misdirection surround her as the month launches. Desires meet action and people find common ground as the Libra New Moon on October 5 breathes new life into relationships and agreements.

While we’re looking forward, we’re also looking behind. The New Moon doubles as a bon voyage party for Venus as she begins a retrograde that lasts till November 15.

She’s revisiting territory she’s traveled since the beginning of September, but her catch is by no means limited to that span of time. She’s summoning old loves (in thought, dreams and person), business dealings and all manner of situations that have been under wraps or once loomed large.

Obsessions and magnetic attractions are in the mix, but take care. Use her retrograde to assess value and reclaim bits of yourself. Withhold judgment, or at least action, on new prospects for relationships, businesses or major purchases. They will likely prove to not have the value they initially present.

The endgame or payoff of her retrograde may not be entirely clear until late December, when she crosses the degree occupied by Jupiter as her retrograde begins.

Desires, relationships, talk and the atmosphere all become darker and weightier when messenger god Mercury and then the Moon dive into Scorpio as well on October 9. The intensity continues through month’s end, with Mercury emerging into happy-go-lucky Sagittarius the day before Halloween.

“I want!” morphs from musing to mandate October 10 and 11. New information may stymie the process, but that’s also impetus for some people to push through inner restraints and make previously unthinkable moves.

Stabilizing communications are possible October 12. Intimacy blossoms soon after. Speaking from the heart and saying what you want are as natural as breathing October 15, lingering through the 23rd.

The communication mode adds channeling divine guidance into the lovey dovey mood around the 19th. (Could be useful in sifting through whatever the retrograde tide has washed in…or resolving it.) The right words fall from our mouths, into our ears or across our feeds and turn ideas into action. Energy flows where attention goes so … mind your focus.

Rambunctiousness Scorpio-style breaks out on the 22nd. We’re rattling our chains. Bravado, posturing and moves are mushrooming. Cracks are opening for more scary-candid admissions, to ourselves and others. And then the Sun slips into Scorpio, too, on the 23rd, and suddenly it’s Halloween everywhere you look.

Put some of those desires and retrograde baubles under a loupe on the 24th. Venus’ link to Saturn supports finding a good deal, or reaching a commitment. (But you do have to reach out for it.)

Regardless, we’re all hungering for something real, solid, reliable, in our bank account and by our side on the sofa (or, you know) while we’re binge-watching. No settling, either. That’s the demand of the Taurus Full Moon, also on the 24th, when we look at everything in terms of whether it delivers emotional security and sustenance.

No settling, indeed: We emerge from the Full Moon with self-indulgence turned up to 11. Asking – yea verily radiating absolutely entitlement – may indeed lead to receiving. Self-satisfaction runs high by the time Venus meets the Sun on October 26.

Then comes the aftermath: a backwash of discomfort and jitteriness and anxiety as we (and our observers) realize how differently we’re behaving. All are in effect for the weekend before Halloween. Watch out for the ghosts and monsters. Some might get to you subliminally.

No one’s suffering quietly. May as well figure out your end and talk it out. Communication flies by the 29th. You might get to the bottom of a matter, or strike a deep chord that leads to even greater intimacy. As at the month’s start, desires meet action and people find common ground, again.

Then it’s time to laugh, to look for silver linings, and to have a good time. Mercury blazes into Sagittarius on the 30th. He’ll spend most of the rest of the year in joke-cracking, boundless potential mode, going retrograde mid-November and ducking briefly back into Scorpio in early December.

His shift brings a party vibe to Halloween proper, mid-week timing be damned. The month has taken us all through an evolutionary journey of sorts. This is particularly apparent in how we talk about women, and in how women speak up. Watch for new benchmarks in relationships, too. Just in time for Venus to slip back into her Libra home, while Halloween candy is still being handed out.

Thanks to my donors and Patreon supporters who are keeping Astro-Insight free!