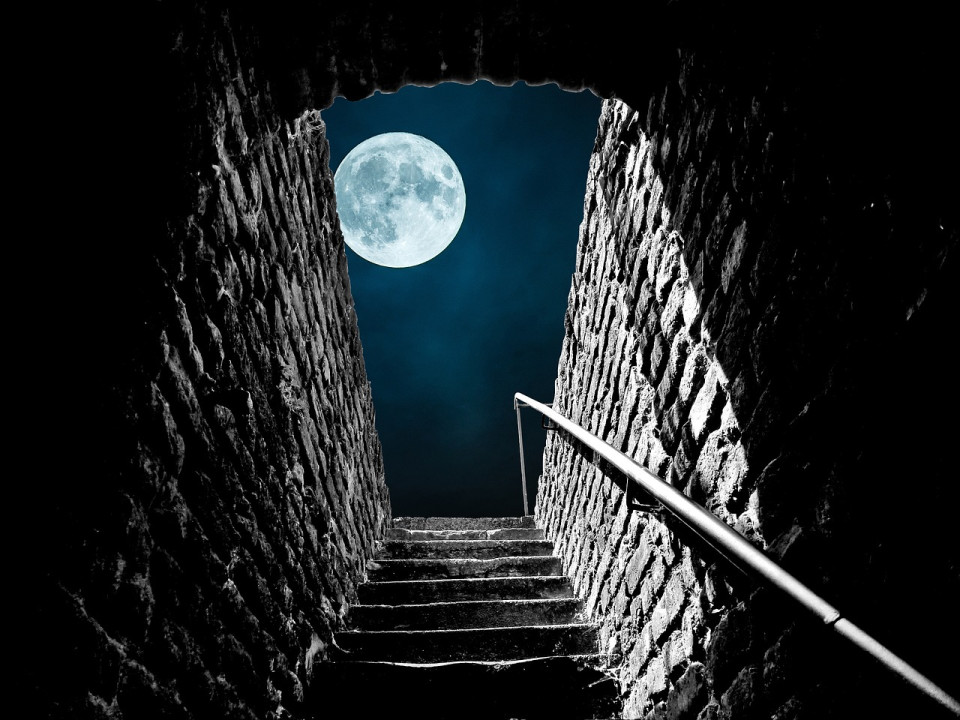 The Scorpio Full Moon immerses us in deep, dark waters we don’t like to talk about openly. Silence doesn’t mean we don’t feel strongly about them, though – and that is inescapably clear now.

This Full Moon lights up the money/resources axis of Taurus/Scorpio, home to our most precious possessions and fiercest subterranean impulses. Here lurk issues of sharing, trust, sex and intimacy (Yours? Mine? Or ours?), of return on investment, of penetrating perception, of power and, under all, of survival.

How are you feeling about them these days? Is “intensely” an understatement? Emotions do crest under a Full Moon, but the current waves are off the charts. As they crest and crash, they’ll reveal, purge, clarify, simplify and possibly purify.

What has them at maximum strength is not the Moon’s sign alone. Its modern and traditional rulers have joined forces: Mars, ruler of our drive and actions, and Pluto, lord of the underworld and agent of unavoidable change, meeting in structure-oriented Capricorn. In simplest form, they are the gods of war and death, and they are commanding us through the rising emotional waters.

They are emboldening practical, concrete responses – devising game plans and acting on them (as well as on ones we’ve been formulating), proceeding in cold, calculating, deliberate, measured steps, with an eye to long- term goals and ramifications.

What you come up with may surprise you. Jupiter in Scorpio is mushrooming the Mars/Pluto action, steeling wills and expanding goals, drive, determination and fierceness. Dive into uncomfortable, unpleasant, even scary energies and dispatch them. Fight monsters; dump baggage. Add more zeroes to the end of your target. Dream big, and then bigger, then bigger still.

Aries shoot-from-the-hip approaches are out of style, though you may, of course, witness a few. Approaching life as a marathon is the way to go.

Keep that in mind as you process what the tide washes up for you. Temper any urge to rush; instead, sit with your emotions and consider your responses. As per usual lately, whatever this Moon’s strike forces instigate has been a long time coming, and will be with us for a long time as well.

Some of this will be nasty – metaphoric dirty diapers, if you will. Expect more on scandals involving sex, power, prominent men, hush money and corruption. Harness the Moon’s potentials for your own purposes, though (and you have a few), and the personal benefits could be profoundly valuable.

The cresting emotions, the clearings and the strike force responses all have a fated quality. The New Moon is forming a grand cross with the Nodes – the North Node of destiny, or where we’re heading, and the South Node of the past and what we’re moving away from. This configuration pulls us in multiple directions at once, which has the effect of suspending us in the moment and makes the Moon’s emotions inescapable.

We’re being shown the way we want to go, and that feels fated, too. It’s coming from two yods, or Fingers of God. One is from Mercury and Venus to the Moon; thoughts and desires are pointing to intense emotional impulses. The other is from the Moon and Saturn to Venus: own up to what you want and ask fror it. The configurations lace together emotional needs and desires and say:  This way to the future.

It’s a place of greater comfort than recent events (and this Moon’s emotional outpouring) may indicate. This Full Moon offers emotional containment and stability (eventually) and points to solid ground, via a sextile from Saturn to the Moon and a trine from him to the Sun.

What you want is support and security you can possess and trust. You may have to work for it and make room for it. It is within reach, though, and this Moon delivers the motivation to go for it.