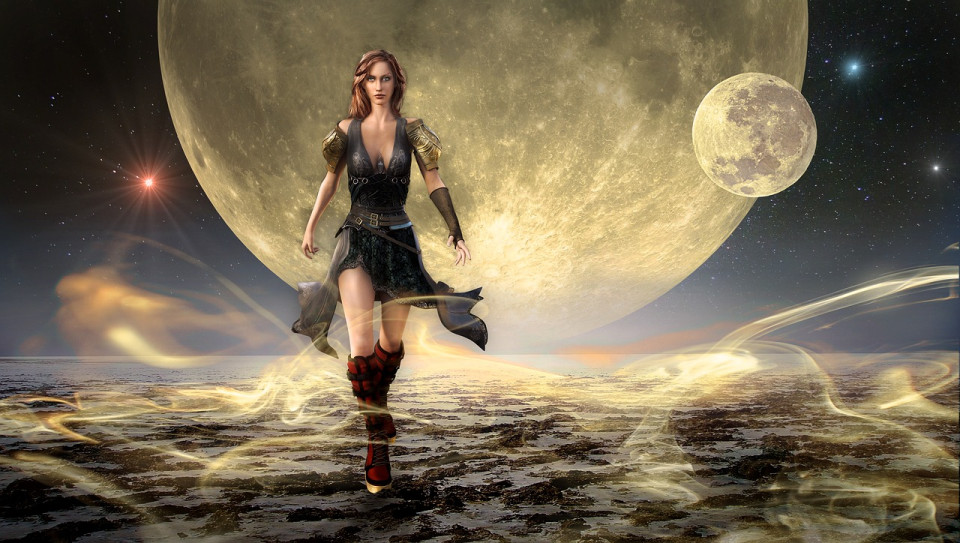 Aaaaaaaaaand……action! Slow but unstoppable forces are bearing down on relationships, agreements, structures and foundations aplenty. Resistance is futile. None can withstand the pressure beaming down from the Libra Full Moon.

What, no diplomacy? Grace? Artful words? Passive aggression? Not this time. Libran qualities are giving way to a firm and stern directness under this Moon. It’s guiding emotions to a crescendo and demanding not merely a response, but concrete movement. Much like a conductor raising one hand to increase an orchestra’s volume, then pointing the baton to cue a part. Except without such nuance; this cosmic conductor is shoving the backs of instrumentalists to spur them to action.

Baby steps suffice. Baby steps may, in fact, be all that are immediately possible. And baby steps, in actuality, do not stop, but continue and grow steadier, ultimately into mastery, as a child develops.

So will these. Whatever groans, lunges or slides into motion now has the probability of continuing for the long haul.

The Full Moon is lighting up the Aries/Libra axis, which seesaws between the individual and the Other. We’re receiving an emotional status report about the role of specific people in our lives, as well as the dynamics, agreements and rule books under which our relationships operate. Continuing as is is not an option. The report is coming with a shove to do something about all of this.

The pressure and demand for movement come from the dynamic configuration, called a t-quare, between the Full Moon and a conjunction at their midpoint, of Mars (ruler of our drive) and Saturn (lord of structure and order), in Capricorn (sign of institutions and the status quo).

A Mars/Saturn combo can feel like one foot on the gas pedal and one foot on the brake. The pair can also bring measured, deliberate action. That’s happening now. Stasis is not possible, because the pair is receiving an equal push from emotions and intellect, and the upshot is something’s gotta give.

Whatever comes up for you now, incentive will abound to take next steps. Or tectonic shifts could occur before your eyes. You could experience – or witness – anger, a rise in gumption and determination. Responsibility, commitment and accountability could play a role.

There may also be a sense of a long time coming. Mars and Saturn are both planets of timing. They work like the second and hour hands on a clock: Saturn deals in long units of measurement, while Mars is more like a trigger.

Their coming together now says, “It’s time.” Time for what? Look back to 2013, when the Uranus/Pluto square activated the degrees of Capricorn that Mars and Saturn are currently occupying. Foundations and structures shifted massively and permanently then, affecting how we experience relationships and, in many instances, fundamental family dynamics.

This was especially true in the last week of 2013, when a cardinal t-square took place in roughly this same place, and involving Mars. Then, as now, the pressure of the t-square dumped out in the early degrees of Cancer, home of the Moon and sign of family, nurturing and tribal tradition.

Whatever that year and tectonic shifts meant for you, it’s time for the next big stage.

Your heart is on board. It knows what it wants. It’s sending clear signals, too. Venus, ruler of relationships, money and creativity – and ruler of the Libra Full Moon – is in a distant but easy flow with Mars. She’s telling him what she wants, and he’s delivering the goods, slowly but tangibly. That’s exactly how Venus in Taurus likes her desires fulfilled: physically, palpably, so she can be sure of and savor them.

Slow-and-steady is desirable for another reason: The Sun is conjunct Mercury retrograde in impatient, hothead Aries. His retrograde motion throws unreliability into communications. Quick responses may be acting on incomplete information, or misunderstandings, or outright lies. Then again, since retrograde Mercury is also part of the intellect end of the t-square to Mars/Saturn, impulsive thoughts and words might shove the pair into action. There’s a certain honesty to what is blurted out now, and impolitic or cringe-worthy statements may turn out to trigger movement that’s been long in coming.

Playing nice will not be the fashion, even with this Full Moon being in Libra. Its emotional harvest brings reality home and motivates long-term movement: leaving unfulfilling or out of balance relationships and committing to, or at least taking steps toward building, ones with lasting value, as measured by our hearts.