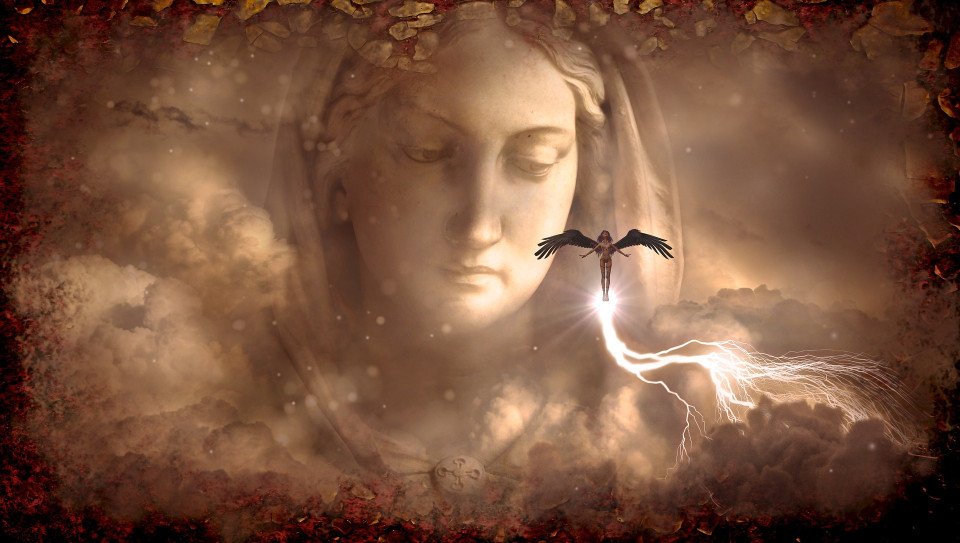 What is real? What is an illusion? These questions set the tone for this year’s chatty Gemini Full Moon.

A Full Moon in this sign is usually a bit odd. This one pushes the norm.

Full Moons are all about emotions and Gemini is anything but. A Gemini Full Moon demonstrates the emotional impact of words and information, whipping them up, working us up and reaching – sometimes piercing – the heart.

This year’s has an air of unreality, of cotton surrounding the brain, of romance, magic, confusion and deceit. It’s as if we’re at a party, with a fog machine running and novelty glasses with rose-colored lens being handed out as favors.

The supplier is smack in the middle of the festivities, illusionist Neptune, in an exact t-square to the Sun and Moon. The force is both escalating and forcing out fantasy, lies and deceit, while doing the same to love, compassion, empathy and divine guidance.

Neptune has a helper, too: the Moon’s ruler itself, Mercury, just one day into retrograde motion and only getting started on a 20-day mission of complicating and rerouting our communications and getting around. He’s still in the apparent stillness of the station, which adds a suspended-in-time effect to the proceedings.

Because of this atmosphere, welling emotions may be cloudy, or confusing, or muffled, or blissing you out to the point of not caring. You may float around in a daze. Your reaction to information may push you to escapism, from binge-watching to boozing to retreating into a fantasy land. (Imagine the news doing that to a person these days! I mean, really!) The process of intellect converging with emotion could lead to a higher, forgiving or loving viewpoint. Or all of the above. Simultaneously.

Fortunately, this event has aids for discernment and safe(r) passage. One is the release point for the t-square’s pressure, the empty space in Virgo, opposite Neptune. Chewing matters over, calling time out, redrawing boundaries – all are probable and workable tactics for navigating the haze.

Another lifeline to stabilization comes courtesy of Mercury. Even though he’s retrograde, he is conjunct Saturn, who brings order and slow, deliberate movement, underscoring the molasses feel of the retrograde station.

Order doesn’t mean same old, same old, though, as Saturn’s journey in the last year has demonstrated. Innovative perspectives, approaches and paradigms are all over the Full Moon’s activity. They’re coming not just more into consciousness, but into being, via a trine from this pair to Mercury’s higher octave (aka genius uncle), Uranus. The visionary and radical change agent of the cosmos, he’s tossing intermittent lightning bolts, which pierce the fog and illuminate what’s within.

When they hit, we’re not doomed to reacting like a deer in headlights. An epidemic of remarkable emotional flexibility and nimbleness is on tap, with the Moon in an exact adjustment aspect to Jupiter and his generous powers of expansion. Since the great benefactor is in the intense waters of Scorpio, this contact makes it possible to perceive more deeply, into one’s self as well as others, than than is the Gemini surface-skating norm. As secrets and previously hidden truths surface, we are facing and responding to them.

Some adjustments will affect or involve relationships and agreements. (Watch for action on legislation.) Doorways are open; opportunities to move are within reach through the Mercury/Saturn conjunction’s sextile to Mars in Libra. Action in or through relationships is the key, such as discussing terms for structure or commitment, or a close ally offering a helping hand.

As you wander through the fog, it may feel vaguely familiar. Remember the mutable grand cross of June 2016? The month put us all in Hanged Man mode, with a sense of watching events playing out (some of which entailed incredible busy-ness) without the ability to steer or direct.

The mutable t-square and the languidness of Mercury’s retrograde station are echoing that grand cross. Do you feel parallels? The difference now is that the Hanged Man isn’t merely watching the movie, but actively working through the plot. (Some of which could relate back to June of 2016.) And at minimum negotiating a way off the tree – if not climbing down altogether.