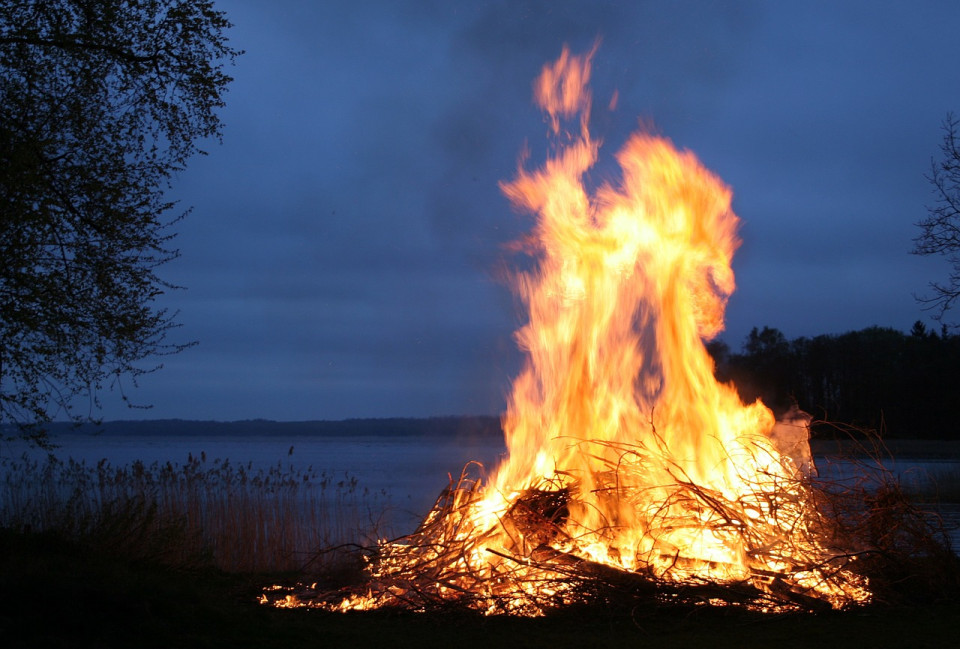 The time for Halloween may have passed, but the vibe hangs in the air throughout November. At turns spooky, scary, secret, salacious and sexy, it’s coexisting now with eruptions of long-building passion and life force.

The mixture is paradoxical, like volcanoes arising from ocean depths. It’s also energizing, activating and unstoppable. Things that go bump in the night — or the psyche — are still on the prowl, but they’re not knocking us off course. Instead, signs and sensations of progress are accelerating, with milestones falling into place as we blaze on.

The two strains, undercurrents and firepower, come together in the defining aspect of the month, which is the final occurrence of the defining aspect of the year: the trine between Saturn in Sagittarius and Uranus in Aries. The lords of order and disruption have been traveling for a year in an easy, mutually supportive flow, simultaneously shattering beliefs, norms and existing structures, while coaxing highly individualistic developments into form and structure.

Watch for action on both ends as this unlikely planetary pairing makes its third exact trine on November 11. The area of impact should be obvious, but if you need clues, look to December 2016 and May of this year, when the first two exact trines took place.

Whatever is blossoming, igniting or blowing up, it furthers the primary function of this trine: self-actualization. Birthing you more and more into expression of your true self.

This round comes with a noticeable push to get over yourself — to stop with the blaming and judging and give yourself a break already. And let the energies rising in you come out in the open and carry you in the direction you know is inevitable. That comes from Saturn and Uranus forming a loose round robin of a grand trine with the Leo north node (“This Way To The Future”), and also activating the healing crisis potential of Chiron (Saturn through an action-demanding square, Uranus via the growth aspect of a semi-sextile).

Whatever comes up, the mounting life force — and excitement of Developments Finally Taking Shape — can convert it to motivation and momentum.

And a lot will come up, with so much of the sky in the deep, mysterious and vaguely dangerous waters of Scorpio. Jupiter is beaming his power of expansion into them, shining light into the depths and coaxing what’s down there to the surface.

It’s not all scary or unpleasant. Some is buried treasure. That bubbles to consciousness with the Taurus Full Moon on the 3rd/4th, which heightens awareness of where we have and where we lack material abundance and sustenance.

The quest for treasure comes more into play once Venus dips into Scorpio on the 7th. All her various interests will intensify in those waters — desires, connections, creativity, lust for money or power — building to greater depth and strength when she meets Jupiter on the 13th.

Heaven-sent overtones permeate all when she trines transcendent Neptune on the 16th. Their link synchs up the two rulers of love (worldly and spiritual) and promises magic for relationships and creativity.

That mix is still hovering when the Scorpio New Moon, on the 18th, encourages diving anew into depths. Don’t be surprised if the drive to pursue a longing, no matter how frightening, rises to cosmic imperative when Mars squares the Moon’s ruler Pluto the next day.

Yet atop these intense waters, fire is burning still. It enlivens thoughts and talk and our information flow, enabling philosophical and even joking approaches, with cosmic messenger Mercury in Sagittarius from the 5th on. The warmth gets a boost when the Sun enters that sign on the 21st.

And the fire is what stands out as the month winds down. That energy, and the gifts of the Saturn/Uranus trine, come to the fore over Thanksgiving weekend. Mercury is, fittingly, the instrument of the cosmos. He unlocks epiphanies, perspectives and possibilities when he trines Uranus on the 25th, then locks in understanding, certainty and structure by joining Saturn on the 28th.

Thinking crystalizes. Resolve settles in. And the atmosphere is, oddly, clearer, too, with Neptune finishing a six-month retrograde and stationing direct on the 22nd. Our minds are prepared to navigate the waters of life with courage, determination and our individual style. No matter that it’s one month out from Halloween. Cue the theme from Ghostbusters: “I ain’t afraid of no ghost.”

Find out how this benefits you personally. Book a private session. And keep up with my latest forecasts by joining my mailing list.