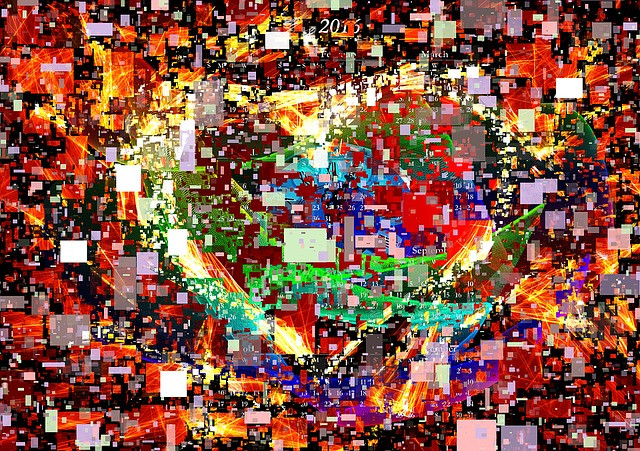 You’re in for a workout in March. We all are. The wind’s at our back, pushing us onward and hurrying the pace. Then other forces join in,  some jerking our heads backward, another sinking us deeper into our bodies.

How to respond? Scurry ahead? Turn around? Flee to the past? Throw a tantrum? Stuff your face?

March’s complex celestial clockwork splays our attention across multiple overlapping timelines. Some are identifiable and pop up for everyone. Others are customized for you, only you. All are infused into the equinox chart, which means time-hopping is an ongoing factor for all of spring.

Watch for echos all month long from late December 2013 or its immediate aftermath. Tectonic shifts then fundamentally reshaped your psyche, and likely relationships and family structure. Whatever grew out of those shifts is up for dramatic expansion now, as Jupiter forms an excruciatingly slow-building t-square with cosmic change agents Uranus and Pluto.

The first stage, peaking March 2, pits mushrooming relationship and fairness concerns against an explosive impulse for personal freedom. By March 30, relationship issues push for deep, lasting and powerful systemic changes — none of which would be possible without the world tilts of late 2013.

The process provides a good, long look at tensions in specific situations and agreements, then births their next big phase.  Be on the lookout for this playing out in political news. New horizons in power grabs — or crackdowns —  are possible by the end of this dance.

Curious to learn more? Read my article for Astrology Hub

While developments from late 2013 are blossoming and expanding, our attention is also being lured backwards. And sometimes yanked. The instigator is Venus, ruler of love, money, beauty, creativity — basically, everything we mortals value. Her domain is coming up for revisiting during her retrograde from March 4 to April 15.

Some of what’s surfacing involves current involvements and agreements, which you may review,  reconsider and possibly reignite. Some of it is downright ghostly. Don’t be surprised if old loves and friends show up in dreams, social media or conversation — or in direct contact.

Old financial matters also have a way of returning during a Venus retrograde. Shelved creative projects or outlets could easily come back to life now as well.

Because Venus is in huntress mode, aka Aries, revisitings and visitations alike come impulsively and with high energy, if not passion.  Or tempers. They invite spontaneity, risk-taking and hair trigger reactions.  You could throw caution to the wind and do Lord knows what. You could just as likely put out smoldering fires and extinguish whatever tiny sparks might have remained.

Every bit of the past you encounter is an opportunity to resolve unfinished business (even if you thought it was done already) and to learn about yourself and what your heart values now, as opposed to then. Whether you take up with an old love or indulge in nothing more than memories, the lasting importance is what you learn about your own heart. Likely you’ll retrieve a part of yourself, or realize you’ve grown so much you would never get involved now with a person or situation like you did before.

You can instigate a lot of this journey yourself. Hunt down lingering business that affects your heart and finances and actively deal with it. Check in on people you used to be involved with. See where your heart lies uneasily in current involvements and address the discomfort.

Be bold. Speak up. Take chances. Declare your emotions (love, even) and see what follows. And have fun.

One caution:  don’t jump into any new relationship, job or deal that presents itself now, or splurge on a high-dollar item. New investments during a Venus retrograde have a way of turning out to not be worth what you thought. (Do. Not. Marry. Do. Not.) As the saying goes, all that glitters is not gold.

The fieriness surges when Mercury enters Aries on the 13th. The vagueness, confusion and unwitting telepathy of February dries up, and communication turns self-starting, spontaneous, impulsive, combustive, assertive, even reckless.

As hurried and impetuous as the second half of the month is, treat Venus’ backpedaling as part of  an ongoing investigation. Mercury will be heading to his own retrograde next month as Venus wraps hers up. Know that some of the investigation will extend into Mercury’s retreat, which will take him from Venus’ Taurus home back into Aries.

Meanwhile, Back in the Here and Now

As timelines begin to pile up on you, grounding cords conveniently lock into place. Developments that have been percolating stabilize and take form (or hit limits) around March 5, when the ruler of our drive, Mars, completes an easy, open current with Saturn, lord of structure, order and commitment. If you’ve been itching for a situation to firm up, it may well then.

After that, how we go after what we want downshifts into the slow, practical and concrete. Mars, the ruler of our drive, leaves the fire of Aries on March 9 for the raw earthiness of Taurus, which he visits through April 20. His presence there not only keeps us in our bodies, but also encourages using and enjoying them. Food, drink and other sensual experiences have a marked gravitational pull, for you alone and à deux.

It’s an irresistibly sexy time. No point in fighting it. Not likely you’ll want to. Sheer physicality will stabilize you and momentarily slow time as developments mushroom and ghosts swirl around.

That gravitational pull toward physicality may be particularly strong at the Virgo Full Moon of the 12th. That Moon may also, however, encourage us to analyze and exercise discernment. Tension results….what to do with it, what to do…

All of this has a life span that outlasts the month of March. The spring equinox, on March 20, when the Sun makes its annual entry into Aries, takes place in the midst of this head-rattling, escalating, impulsive, desire-driven, take-it-to-the-bank, life-changing blend of energies.  Because they are in place at the equinox, they will resonate to some degree throughout the entire spring —  with one twist.

The equinox chart imposes a measure of order on that unruly blend, through the stabilizing, limiting and constraining influence of the Moon tightly conjunct Saturn in Sagittarius. (It’s an uneasy peace, however, since that pair is in direct contact with rabble-rouser Uranus.) We may crave and seek structure; it may be slipped onto us. Integrity, ethics, beliefs or politics may play a role. If you’re seeking a footing, the sure place is in your outlook on life.

Stabilizing doesn’t mean slowing down, though. Aries gets two more blasts as the month winds down. Desire hits the gotta-have-it point when the Sun meets Venus on March 25. The gumption to go for it follows at the Aries New Moon on March 28. Raw life force is breaking out everywhere you look, and in you as well. If you’ve been lacking in nerve, you’ll find plenty coursing through you.

The month ends with communication settling into a practical, calmer, step-by-step mode, as Mercury enters Taurus on March 31. Running around takes on a slower pace as well.

Energies remain high, but we’re more likely to chew on an impulse before leaping on it. Besides, relationships are undergoing monumental systemic changes, building on the expansive tensions that started the month. There’s a lot to take in, process and communicate. You’ve got the time. Trust it.