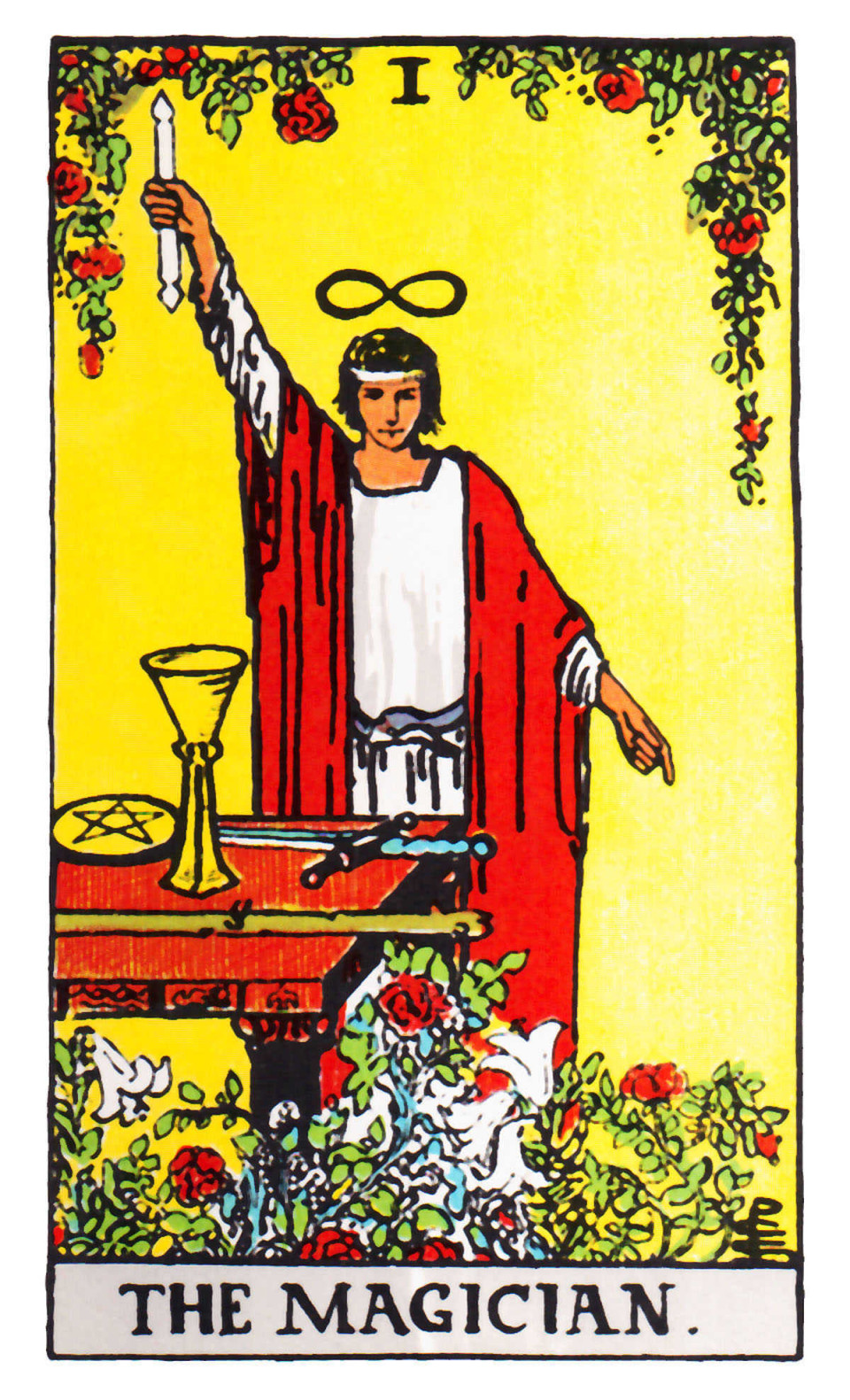 Just within the Tarot deck lurks a poster child for astrologers. It’s an inspirational icon for the highest aspect of what we do — and a warning of the dangers inherent in it.

Our poster child is the Magician, the second card in the soul journey depicted in the Major Arcana. This nominee may come as a surprise. Some of you may have been expecting the High Priestess, which symbolizes intuition and mysteries and arcane knowledge, as well as the darker possibilities of manipulation. Or you might have been thinking of the Hierophant, which can represent the spokesperson for a system of knowledge or beliefs and all the conventions, judgments and rigidity that can go along with hierarchies. Both images do have their applicability, but what the Magician does sums up our work even more clearly and succinctly.

One particular aspect of its being speaks most to astrologers: its role as conduit. In the Rider-Waite deck and ones that follow its imagery, the Magician stands behind a pentacle, a cup, a rod, and a sword. These are the four suits of the Tarot deck, and their collective appearance suggests that the Magician has the full spectrum of worldly tools at his disposal. Instead of directly interacting with them, though, the figure is in a stance of summoning. His right hand is stretched up high, holding a double-terminated wand that points to the heavens and the earth. His left hand is extended downward, with the index finger pointing to the ground. The card catches him in the act of drawing energy from on high and channeling it to the earth.

Whether you look at this as focusing intention, or gaining clarity, or directly summoning power, he is pulling a force from outside his conscious mind and sending it to the mundane world. And what I see him doing is calling down the force that will pull together all his worldly tools. In a sense, he is powering them up.

His action is not far from what we do when we interpret astrological data. Training, systems of interpretation, computer programs, and techniques are our equivalents of the four Tarot suits, the tools that we have before us as we approach a chart. And when we put these tools in motion, we have the potential to call upon something bigger or greater than our conscious mind as we reach conclusions, make observations and pass on information.

I am not proposing that we always access the highest possible information in any situation, nor that we are in any way speakers of divine will. We certainly use our own individual schooling, experiences, frames of reference, biases and filters as we analyze and synthesize planetary influences. We run into danger, though, if we start seeing ourselves as the source of, instead of an interpreter or conduit for, the information that we pass on to clients. When this happens, we’re acting out the negative end of the Magician.

One of my first astrology teachers, Kimberley McSherry of the Houston Institute of Astrology, warned of the dangers of what she called “playing the Magician,” and the concept has proved to be a helpful professional guideline. Confusing ourselves with the source of information  can make us think that we know more (and better!) about a life, based on a chart, than the person who has been living out its energies. And that kind of thinking leads all too easily to trying to impose our will onto clients, to discount or simply not hear feedback that isn’t consistent with our authoritative view, and to lose our effectiveness as counselors.

Early in my training I ran into two textbook cases of adherents to the Magician’s dark side.  I experienced both the frustration and the visceral impact of hearing authoritative, fatalistic pronouncements, and having the would-be voice of truth become more sonorous and insistent when I raised anything that questioned or contradicted its view of my life. Because I had come to each as a client, both insisted on payment for the experiences. At the time, I didn’t feel that I got much for the charges (particularly from the one who’d spent three-fourths of the reading working from a chart with the wrong ascendant, blamed the computer when I finally got her to see the mistake, and then refused to make up the time). In retrospect, though, the what-not-to-do lessons these two people gave me have made up for the exchange many times over. They unintentionally bolstered my respect and appreciation for the archetype of the Magician, and especially for the dangers when one goes bad.

If you’d like to lock in the concept of the Magician as conduit, try an exercise I use with beginning Tarot students. In light meditation, hold up your right hand,  pull energy down through it  and shoot it out your left. I’ve never had a student not feel it. Without fail, they report a physical sensation of something running down their hand and arm, across their shoulders, down the left arm and out that hand.